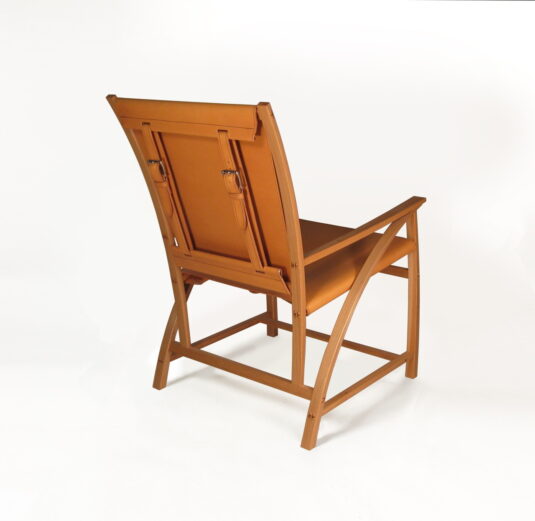 ALBERTA CRAFT GALLERY, EDMONTON AB - Sep 1 - Dec 24, 2018
By Michael Turner
An oft-cited work of Conceptual Art is Joseph Kosuth’s One and Three Chairs (1965). Comprised of a mass-produced wooden chair, a mounted photograph of that chair and a mounted photo-graphic enlargement of the dictionary defi nition of “chair,” the work is noted for its then-daring provocation: Which representation of “chair” is most fitting? In Seated, the provocation is less toward an art debate platform than a call for “re-imagined seating objects,” of which a chair is but one of a number of possi-bilities.
The work of 16 fine craft artists from across Canada, “seats” on display range from stools, chairs and benches by master woodworkers to those constructed of fold formed copper and enamelled metal. In addition to material considerations, attention is given to aesthetics, scale and proportions. But as with most thematic exhibitions, it is style that carries the day. From traditional to contemporary, practical to conceptual, the works all lend themselves to Seated’s serious playground atmosphere.
Notable works include Amanda McCavour’s Still Life (2018). Here, two chairs beckon patrons to wander over, take a load off – but on closer inspection are made not of wood or steel but of “deceptively” strong thread. Deception abounds in Michael Fournier’s knock-down prayer seat. Titled Aibiki (2018) and inspired by Japanese sashimono joinery, this simple-looking design eschews fasteners (nails) and is as ingenious as it is complex. Patrons are encouraged to put this seat together on the first try. A provocation if ever there was one.
albertacraft.ab.ca
Reception Sep 29, 2-4pm