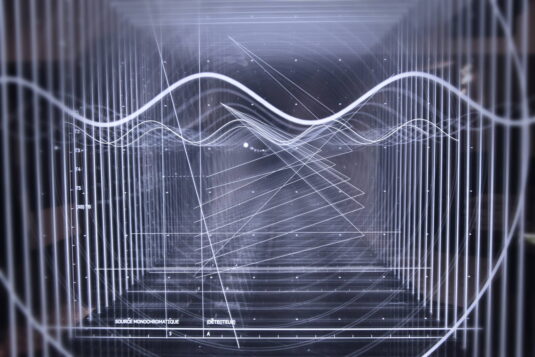 NEW MEDIA GALLERY, NEW WESTMINSTER BC - To Sep 30, 2018
By Michael Turner
The word “gyre” derives from the Latin gyrus, and the Greek gûros before it, meaning “circle, ring, turning.” In geometry, the gyre has a point of origin from which it moves progressively wider, forming a spiral, vortex or tunnel, while in nature, it is associated with oceans, of which the world has five major systems. For this group exhibition, the gyre is evoked as a cultural metaphor, a condition that traps its subject, only to be freed by gravitational forces, an unusual disturbance or by a chance encounter.
Frequencies (Light Quanta) (2014), by Montreal-based Nicolas Bernier, is an arresting installation developed during his residency at the Sound LAB at LABoral Centro de Art y Creación Industrial in Gijón, Spain. Here, Bernier’s research into the quantum (the smallest measurable value of energy) has manifested in a clear-boxed display that contains 100 sound and light fragments that develop by chance, disrupting the viewer’s perception of time and space.
Forward (2015), by Bogatá-born Daniel Iregui, is a hypnotic wall work that uses code, randomness, interactivity and projection mapping to create a “constantly changing choice of perpetual tunnels that generate infi nite ways to get to a distant point on the horizon.” Equally hypnotic – and no less disruptive – is Korean-born Chul Hyun Ahn’s Tunnel (2008), a knee-high cinder block, light and mirror structure that invites pa-trons to look down on its infi nite sconces. Oddly enough, these sconces bring to mind Donald Judd’s Untitled (Stack) (1967), but also Buddhist notions of the void. Unlike Bernier’s and Iregui’s installations, Tunnel appears to have no digital interfaces.
newmediagallery.ca