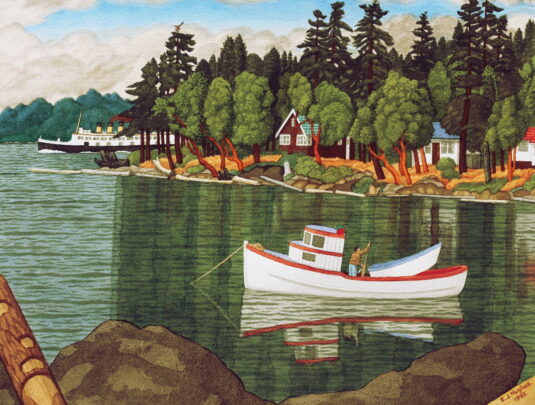 Article byRobin Laurence
In the summer of 1948, E.J. Hughes made a sketching trip by bus from Victoria, where he was then living, to Cour-tenay, on the east coast of Vancouver Island. He disembarked at a number of stops along the way, including Ladysmith, Chemainus, Nanaimo and Qualicum Beach. The detailed drawings and extensive notes he made on that expedition, which was supported by an Emily Carr scholarship, supplied subject mat-ter for his paintings of coastal life and land-scapes for years to come. So writes Robert Amos in his deeply researched and richly illustrated book E.J. Hughes Paints Vancouver Island, published by TouchWood Editions (touchwoodeditions.com).
Edward John Hughes was born in North Vancouver in 1913, grew up in Nanaimo, and spent most of his painting career in small Vancouver Island communities, including Duncan, where he died in 2007. In his devotion to the British Columbia landscape, he is often referred to as the heir to Emily Carr. His characteristic style, however, could not be more different from hers. Although his early work was “primitive” in the manner of Henri Rousseau, Hughes is best known as a folk realist, executing his paintings and watercolours in a meticulously controlled manner, with flattened space, tilted perspective, and vividness of form and colour. His Vancouver Island images, the subject of Amos’ book, include log-strewn beaches and busy harbours, summer cabins and sawmills, farms and fl oating homes, and all manner of vessels, large and small, plying the coastal waters.
Amos, an artist and writer based in Victoria, first encountered a Hughes painting in 1975, shortly after arriving on the West Coast from Toronto – and was captivated by it. He recalls later seeing an exhibition of the senior artist’s work in Nanaimo and, as he emerged from the gallery, being struck by how much “the whole world looked just like a Hughes painting.” This, he adds, “is how art is supposed to work!”