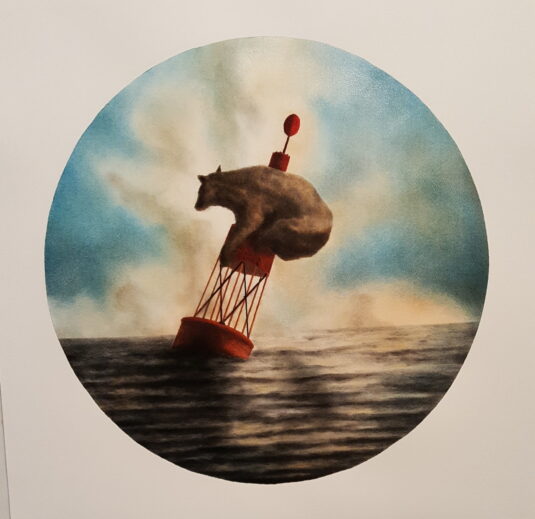 GALLERY JONES, VANCOUVER BC - Sep 6 - Oct 6, 2018
By Michael Turner
The idea of the artist collective continues to confound those who hold a romantic view of the artist as a necessarily singular figure tormented by their genius. But North America has a rich history of collective visual art practitioners, from Toronto’s General Idea to the US Southwest’s Postcommodity. Among the more infl uential collectives of the past quarter-century is Winnipeg’s Royal Art Lodge (1996-2008), whose art is based in illustrative drawing and painting, and who invariably spring to mind when looking at the work of the Groundhogs.
Formed in 2007 by artists Anne Ashton, Randall Finnerty, Paul Morstad and Craig Welsh, the Groundhogs also display a penchant for the natural world and its relationship to human consciousness. However, where the Lodgers’ simple, often violent psychosexual illustrations float over unmarked fields, the Groundhogs ground theirs, more often than not against blue skies, as in Ashton’s work, or in washed-out ones, as in Finnerty’s. Certainly all of them model their surfaces harder and with more technical precision than the Lodgers.
For this reunification exhibition, the Groundhogs provide audiences with a gentler though no less foreboding view of human, plant and animal interactivity at a time when temperatures are rising and icebergs are melting. In Morstad’s Who Cooks for You (2018), a snow-bound Renaissance princess casts a withering eye from a forest of teth-ered owls, while in Finnerty’s Bear on a Buoy (2018), isolation competes with loneliness. But not all is storybook narrative. In Rings (2018), Ashton gives us a circle comprised of mushroom caps, bark, and a bird’s egg and skull.
galleryjones.com