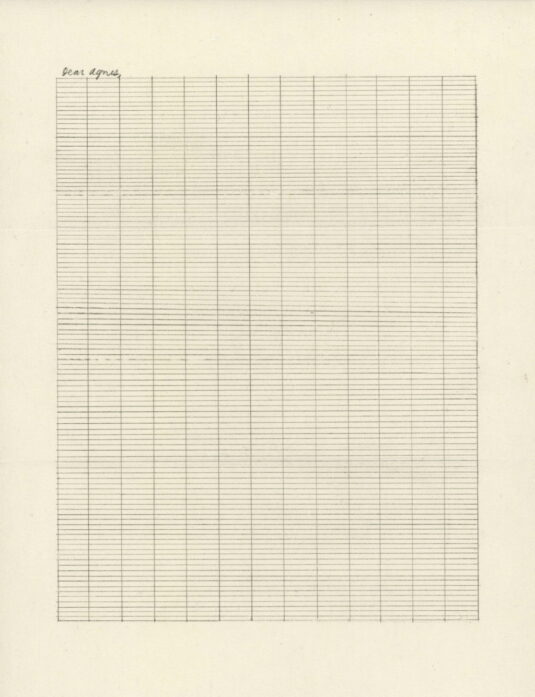 Tammi Campbell: Dear Agnes Agnes Martin: The mind knows what the eye has not seen Sarah Stevenson: Nothing Hidden

ESKER FOUNDATION, CALGARY AB - Sep 22 - Dec 21, 2018
By Michael Turner
Born in Macklin, Saskatchewan, in 1912 and raised in Vancouver, Agnes Martin spent most of her adult life in the United States – fi rst in Bellingham, Washington, then in New York City. There she came to prom-inence alongside Barnett Newman and Ad Reinhardt, with whom she was close. Following the death of Reinhardt and the demolition of her Lower Manhattan studio, she hit the road, eventually landing in New Mexico in 1968. In the towns of Cuba and Galisteo, Martin continued to refi ne an al-ready minimal practice noted for faint lines, meticulous grids and soft colour.
Since her passing in 2004, Martin’s reputation has grown neck-and-neck with her influence, particularly among younger artists disposed to form, feminism, ethics and spir-ituality. In recognition of her importance to art historians and studio practitioners, the Esker Foundation has fashioned a sen-sual exhibition focused on her print works, on paintings she made in relation to those prints, as well as ephemera and source mate-rial, much of it drawn from Martin’s life and later travels through Saskatchewan and BC.
In concert with Martin’s exhibition are works by artists who, if not in dialogue with Martin, share a vocabulary. Tammi Campbell’s Dear Agnes (2010 -17) is a serial work comprised of “visual letters” (graphite and rag paper) the artist drew at the start of each day and, once “written,” folded twice and stored in sequence. Described as “drawings in air,” sculptor Sarah Stevenson’s elegant wire and string hangings bring to mind that which Martin evokes in the viewer when experiencing her drawings, paintings, prints and film.
eskerfoundation.com