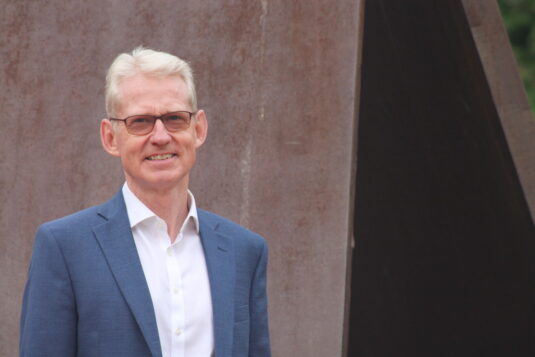 WESTERN GALLERY AND OUTDOOR SCULPTURE COLLECTION, WWU
By Matthew Kangas
Formerly director of Reykjavik Art Museum in Iceland and of public art in Cambridge, Mass., Hafthor Yngvason arrived in Bellingham in 2015. Since then, he has had a measurable impact on the quality, security, protection and restoration of the 33 Minimal, Post-Minimal and Postmodern artworks in Western’s Outdoor Sculpture Collection, mostly large-scale outdoor sculptures. Considered among the top three university-based sculpture collections in the US (with MIT and the University of California – San Diego), the collection held by the Western Gallery began in 1960 with an early bronze fountain by James FitzGerald. It grew in the ensuing five decades to include works by high-ly praised American, European and Asian artists.
Underwritten then and now by Seattle collector Virginia Bloedel Wright, the collection began as she chose to feature Richard Serra and Mark diSuvero (their first commissions were from her) as well as Alice Aycock, Donald Judd, Anthony Caro and Bruce Nauman. Several works were co-funded by the National Endowment for the Arts and state entities. According to Yngvason, “Twelve [sculptures] have been restored and two more are in process.” A Provost’s Fund of US$300,000 covered that work, with an ensuing annual upkeep estimate of US$30,000. Mrs. Wright has extended her support as well. Yngvason concluded, “We are making efforts to bring in school and senior groups so our community outreach can create a network of support.” When asked about dream acquisitions, he smiled. “We are getting a new Sarah Sze and one [sculpture] by Luis Camnitzer,” he said and then sighed. “But a Calder would be great – and a big David Smith too!” For now, the col-lection remains free and open to the public.
westerngallery.wwu.edu