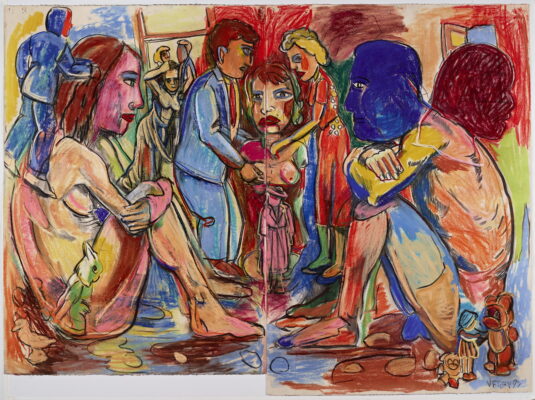 JAMES HARRIS GALLERY, SEATTLE WA - To June 23, 2018
By Matthew Kangas
Celebrated large-scale ceramic sculptor Viola Frey, who died in 2004 at age 70, is often remembered as a beloved professor of art at California College of Art, where she taught until 1999. Before, during, and after providing encouragement and mentorships to several generations of painting and ceramics students, Frey created an enormous population of segmented, clay-sectioned, garishly glazed human figures, mostly of Californians wearing greasy Grapes of Wrath aprons and Bay Area businessmen who could double for President Bill Clinton.
With a special dispensation from her posthumous foundation, James Harris, who knew Frey well when he worked for Rena Bransten in San Francisco, has selected a small but fulfilling survey of paintings, pastels and ceramic sculptures done between 1975 and 1997. They draw together her rich art-historical sources, such as porcelain figurines – she did a residency at Sèvres, outside Paris – and, alternatively, junky flea-market kitsch, which she collected shrewdly and obsessively. This is Viola Frey’s America: crowded, flashy, fat and overconsuming everything from food to carnival pandas.
Child of a ranching family in Lodi, California, Frey couldn’t get out of Dodge soon enough and traveled to Tulane University in New Orleans to study with George Rickey and Mark Rothko. Thence to New York, where she quietly toiled away in the business department at the Museum of Modern Art. Back in California, it all came stumbling out in small and large conglomerations of objects, some out of scale, like a giant hand, some made painfully tiny, like a female nude studio model.
jamesharrisgallery.com