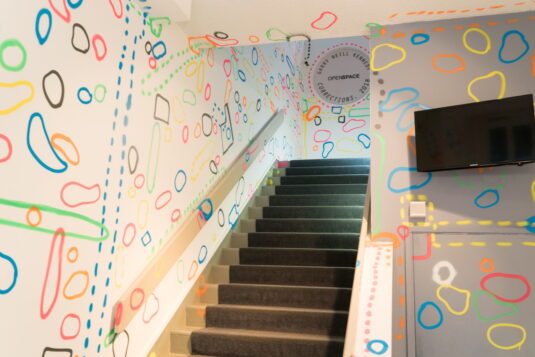 OPEN SPACE, VICTORIA BC - To December 31, 2018
By Christine Clark
The first in a series of stairwell installations intended to celebrate Open Space’s 50th anniversary in 2022, Garry Neill Kennedy has created CORRECTIONS, a site-specific wall painting made up of red, green, yellow, blue, orange and black line drawings spray-painted onto a white wall. The drawings include dash lines or are used to emphasize infrastructure such as a light switch; some of the drawings are circular, oblong or lobular. The work as a whole suggests an uneasy hybrid of fluorescent orange construction marks and of petroglyphs still sometimes glimpsed in quiet corners of our province.
Garry Neill Kennedy was the president of the Nova Scotia College of Art and Design (NSCAD) from 1967 to 1990, where he revolutionized art and art education in Canada, introducing a new emphasis on conceptual art with a staff of politically active artists and wildly experimental teachers. Kennedy has been awarded the Order of Canada (2003), a Governor General’s Award in Visual and Media Arts (2004) and a Doctor of Fine Arts (honoris causa) from NSCAD in 2011.
His exhibition career, ongoing since 1963, maintains a critical focus on institutions of power and control. Large-scale wall paintings, usually accompanied by printed workbooks, redefine colours and words as powerful symbols. Kennedy’s work explores subjects such as Maher Arar, ethics, NAFTA relationships and the power/abusive potential of uncontrolled wealth and has been exhibited internationally. SPOTTED, for example, an ominous work about the CIA’s extraordinary rendition airplanes used to secretly transport terror suspects, was included in the Oh, Canada exhibition (2012) at Massachusetts Museum of Contemporary Art (MASS MoCA).
openspace.ca