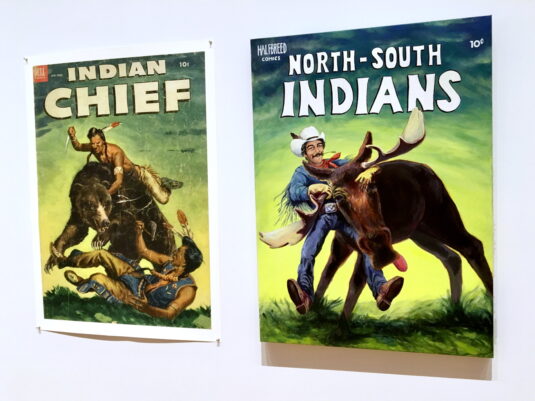 TWO RIVERS GALLERY, PRINCE GEORGE BC - To July 8, 2018
By Michael Turner
As a child growing up in Prince George, Métis artist Kim Stewart was raised on “family lore” as told to her by her father. With her brother, the two siblings would “take sides as the East- West Indians, battle on their ranch and practices their horsemanship.” But as much as stories, practical knowledge and home life shaped her development, she was, like most children born after the Second World War, equally influenced by media images, toys and books that both introduced and reinforced stereotypes of “Indian-ness”.
Over the past few years, Stewart has accumulated an archive of images and objects that signify “Indian-ness.” She shows a particular interest in comic books from the 1950s and ’60s, which, along with television, played leading roles in the misrepresentation of Indigenous peoples, often to “absurd” ends. For this exhibition, Stewart has scanned a number of comic book covers, enlarged them and placed them alongside “images painted in the same style to reflect family stories and experiences.”
In addition to these juxtapositions, Stewart has taken novels by best-selling American western writer Zane Grey and, through artful redaction, produced from their ruins a series of “hidden messages.” A third work returns the viewer to the intimacy of Stewart’s early years, this time in the form of an installation based on the family living room. Decorating the walls are horse blankets, toy guns, beaded gauntlets and bunting. Amidst that, a loop of family films replaces such TV entertainments as F Troop, Bonanza and The Wonderful World of Disney.
kelownaartgallery.com