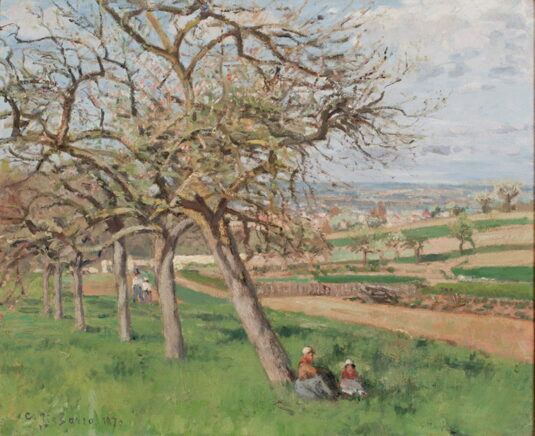 KELOWNA ART GALLERY, KELOWNA BC - June 16 - Oct 28, 2018
By Michael Turner
Hamilton businessman and philanthropist Herman Levy (1902-1990) had “cultivated” an impressive European art collection by the time he donated it to the McMaster Museum of Art in 1984. Totalling 185 drawings, paintings and etchings, the collection ranges from 15th century Albrecht Dürers to modern works from the 1950s and ’60s. But Levy wasn’t finished. Accompanying his donation came an equally impressive financial bequest stipulating that its funds be used to continue the “cultivation,” but only of works created outside of North America.
While the Dürer etchings delight, and the modern works interrogate, it is the Impressionist and Post- Impressionist landscapes, portraits and still lifes that illuminate the collection, providing temporal meat to the collection’s pre- and post-19th-century buns. Represented here are works by Impressionists Claude Monet (Waterloo Bridge, Effet de Soleil, 1903) and Camille Pissarro, and Post-Impressionists such as Vincent van Gogh (Untitled, Still Life: Ginger Pot and Onions, 1885).
Orbiting these periods are eye-catching paintings by late-17th-century Baroque painter Mary Beale, who was known for her portraits as well as her business sense. Another is the Realist painter Gustave Courbet, who elevated working life to the level and scale of history painting. And then there are those who are relatively lesser-known, who produced even less known works that await the viewer like a long-lost friend.
For Okanagan audiences familiar with BC’s art writing community, this could be said of Expressionist painter Chaïm Soutine’s Portrait of the Painter Richard X. (1916-17), whose subject bears a striking resemblance to that most Musilian of critics, the ex-pat Canadian art critic Aaron Peck.
kelownaartgallery.com