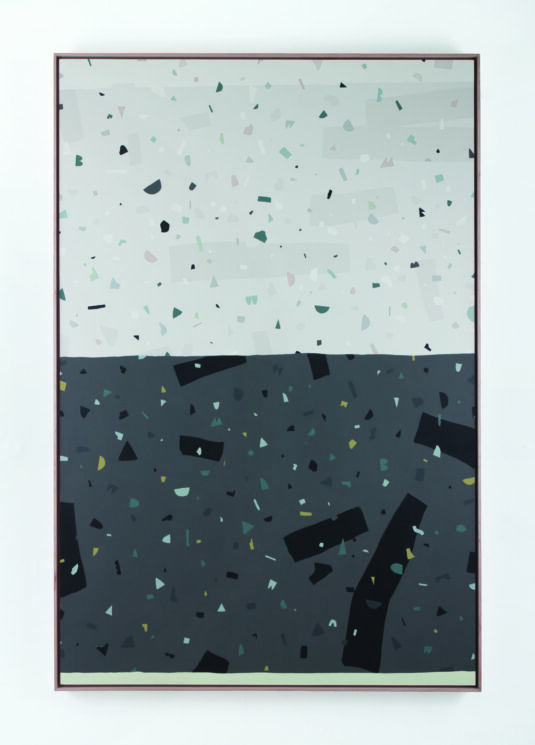 KIMOTO GALLERY, VANCOUVER BC - To June 9, 2018
By Michael Turner
Scott Sueme was raised in Vancouver, and his first forays into art include his participation in the city’s burgeoning graffiti subculture. From there, his exploration of art, design and mural painting included an educational stop at the Emily Carr University of Art + Design in 2016, as well as collaborations with HCMA Architecture, P22dDesign, the City of Vancouver and Hootsuite. More recently, Sueme teamed up with the Vancouver Parks Board to create a work  on the surface of a Mount Pleasant basketball court.
As busy as he has been outdoors, Sueme still has time for gallery display. His current exhibition features a range of acrylic-on-panel paintings indicative of an interest in colour, line and form, and shows a historic knowledge of painterly, hard-edge and graphic styles. This is most evident in works such as Rock Samples Under Microscope (2018), with its divided Rothko-like field over which a blizzard of expressive shapes – squares, triangles, rectangles and trapezoids – achieve unity through careful distribution and scaling.
Though resistant to determining factors like context and representation, Sueme’s formalism is not averse to revealing titles. In Shoe Strings & High Tops (2018), the artist has taken an instance of athletic footwear and reduced it to its elements. Using a base repertoire of five colours – blue, yellow, tan, brown and orange – Sueme builds the shoe not with pigment but, in figure-ground fashion, implies it through absence, leaving us instead with the afternoon sky, the sun’s pale reflection, the ethnicities of its players and funky undone laces.
kimotogallery.com