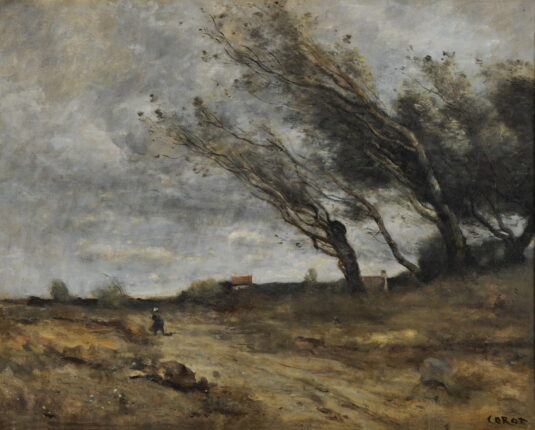 FRYE ART MUSEUM, SEATTLE WA - To August 5, 2018
By Matthew Kangas
Part of what’s fascinating about the Frye Art Museum’s summer blockbuster exhibition, Towards Impressionism: Landscape Painting from Corot to Monet, is learning how international the influences were on 19th-century French painting. Poussin spent most of his life in Rome, as did Corot. The French Romantics – on view here – were stunned by works of a young British artist, John Constable, who began showing in Paris in the 1820s. The breezy seascapes of Dutch painters had an impact, too, especially when the Parisians gravitated to Brittany and the Normandy coast. The Frye survey, consisting of loans from the Museum of Fine Arts in Reims, France, is the only West Coast venue for this survey of what became known as the Barbizon School, named after a tiny village near the forest of Fontainebleau where artists gathered to paint outdoors – a radical move – and honor what critics called “untended nature” or “scenes of everyday life.”
Visitors will be charmed by unknown examples of familiar artists such as Corot, Courbet, Monet, Millet, Pissarro, Renoir and Sisley (half-English), but, more importantly, by their predecessors, the Barbizon group and the Honfleur circle which include superb artists from the Frye’s own Founding Collection, such as Narcisse Diaz de la Peña, Félix Ziem and Charles-François Daubigny. Their canvases have less blatant sunlight than their successors, but the dark pathways of forests and seaside dunes have an appealing, hypnotic quality all their own.
fryemuseum.org