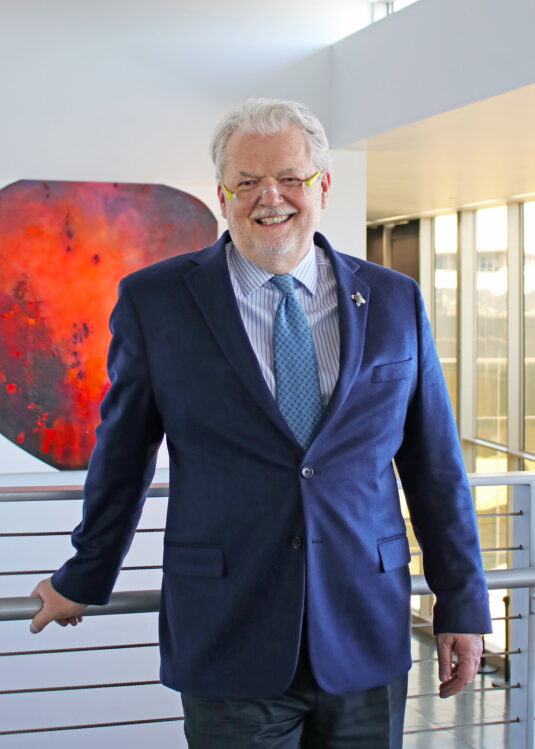 TACOMA ART MUSEUM
By Matthew Kangas
When Stephanie Stebich left Tacoma Art Museum (TAM) to head the Smithsonian American Art Museum in Washington, DC, she left a legacy of unmatched successes that made TAM “already a model for a middle-size art museum,” as her successor, David Setford, put it recently. Amply filling Stebich’s shoes, British-born Setford studied art history at Leicester and did graduate work in museum studies at Manchester. Coming to Tacoma this March at the height of TAM’s ambitious expansion plans, Setford, 62, has a strong background in a variety of administrative and curatorial roles since and before his 1990 arrival in the US.
While Stebich landed and oversaw the wing of the Haub Family Collection of American Art of the West, Setford is managing the new Jack and Rebecca Benaroya galleries under construction now, like the Haub wing, designed by Olson Kundig of Seattle. With the building opening in January 2019 to showcase Pacific Northwest art and especially glass collected by late Seattle real estate developer Jack Benaroya and his wife, Rebecca, Setford is charged with raising funds to endow TAM’s increased operating expenses.
Setford has a dream show in mind, too. “You could build a whole show around something from the permanent collection, like our Degas or Boudin, and tell the whole story of that part of the collection, borrow other paintings from the West Coast, and tour the whole show,” he mused.
“I had originally wanted to be an artist, like my father,” Setford confessed. “But he didn’t want me to be one, so the next best thing was art history. When a friend of his took me to see a roomful of Mark Rothkos at the National Gallery, I had my life-changing moment.
“I want to create similar access moments here in Tacoma, and that’s going to mean taking programs into the community as well as having family events and school tours in our beautiful building.”
tacomaartmuseum.org