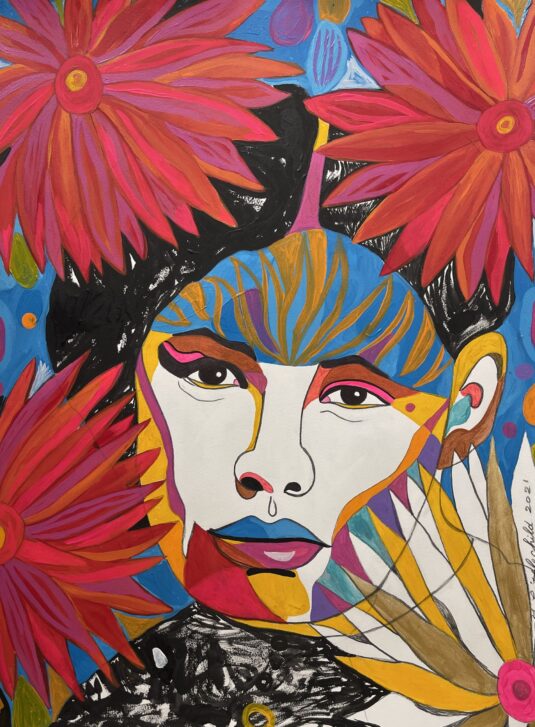 The garden, George Littlechild says, is his sanctuary. It also served as inspiration for his latest series of paintings, while providing a needed reprieve from the tragic subject matter he had addressed during the previous two years. By phone from his home in Comox, on Vancouver Island, Littlechild recalls the series of drawings, Here I am – can you see me? ôta niya ê-ayâyân – kâ-kî-wâpamin? (on view at the Art Gallery of Alberta to March 14), which he dedicated to the thousands of Indigenous children whose lives were lost and identities erased by their forced attendance at residential schools. Working from group photographs of unnamed children, their hair shorn, their culture and personhood further obliterated by school uniforms, Littlechild often found the imagery so overwhelming that he cried as he drew.

Of his new paintings he says, “I was coming from a dark place and I needed light… Summer came and the garden [bloomed] and it lifted the spirit.” He recalls hours spent watering the garden by hand and describes the abundance of flowering plants, fruits and vegetables. “I felt connected to Mother Earth and thought of the people I wanted to have in my life – my muses.” They include his late auntie, Helen (Littlechild) Omeasoo; his mother’s cousin, Philomene Laroque; and his sister, Marilyn Rose Price. They also include his partner, John Powell, chief councillor of the Mamalilikulla First Nation. “It’s his garden – I’m the grunt,” Littlechild says with a laugh and, well, okay: he’s the “grunt” who honours verdant life, enduring love and the creative spirit in his new series of paintings.