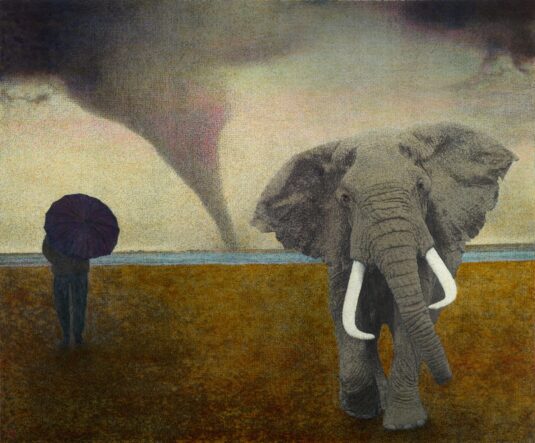 “The activities of daily life,” writes artist Duncan Regehr in the introduction to his recent Journey series of paintings, “are not generally recognized as being important to the path of destiny; however, when we experience an impactful moment, be it one of coincidence, karma, epiphany, a reckoning of bliss or tragedy, we become aware that we are always at the threshold of destiny.” Indeed, it is this threshold, more than destiny’s pathways, that the artist has chosen as the subject of his series.

Drawing on Western myths and legends, the one-word titles of Regehr’s paintings more often than not provide immediate contexts for their foregrounded figures. In Prometheus (2021), the man loaded down with two small buckets of fire is not so much carrying fire as stealing it. In Goliath (2021), the female figure is only the Philistine giant because the smaller figure beyond her must be David. Same too of Helen in Helen (2021), who could be anyone if not for the Trojan Horse in the distance. Yet the inverse is also true. In Hannibal (2021), it is the elephant that is foregrounded, making the silhouetted figure behind it the
Carthaginian general.

The spare landscapes that mark Regehr’s dreamlike, surrealistic paintings stand in contrast to an artist who has led a remarkably busy and accomplished life. The child of an artist, the Lethbridge-born Regehr has operated studios in Los Angeles, London, Madrid, Toronto and Victoria, BC. He is also an actor and director who has worked in theatre, film, radio and tele-
vision. His paintings and written work can be found in the Smithsonian Institute, the Jilin Collection and the Focus on the Masters Arts Archives & Library for the Getty Museum.