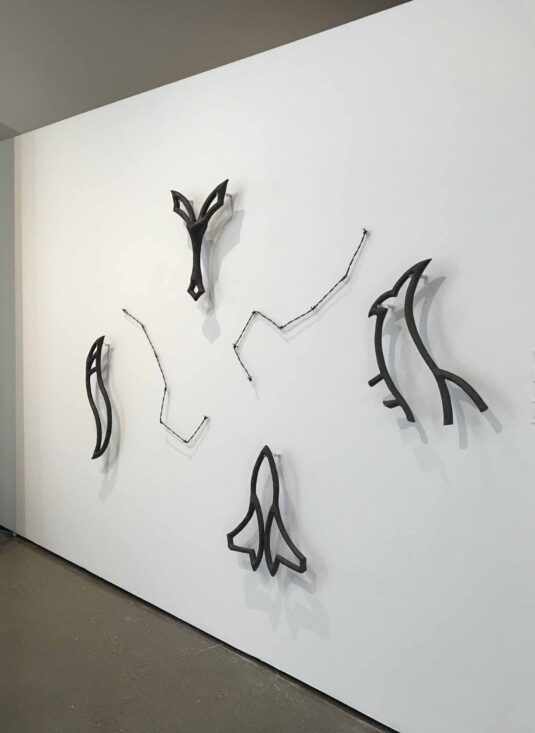 Barbed wire, also known as “the devil’s rope,” is a mid-19th-century US invention designed to keep livestock within pasture lands that were once part of the “Open Range.” In the next century, barbed wire was used as a battlefield obstacle in the no man’s land of World War I, and later in prisoner-of-war camps. Today we know it as a marker of private (and sometimes government) property. Though Adrian Cooke is aware of barbed wire’s history, he seems to have a particular interest in its formal elements.

Working largely in sculpture and water-
colour, Cooke presents a new body of work that emphasizes barbed wire’s variable patterns and textures relative to the Prairie region in which he lives. For Cooke, the imposition of barbed wire fencing on the natural landscape produces a range of narratives, from protection to encroachment. He has fashioned works that allude to the histories of these narratives as well as their potential consequences.

Most notable in this exhibition is a series of three-dimensional wall works based on variations of the barbed form. To produce this series, Cooke began first with laminated sheets of wood, which he carved into shapes, cutting and gluing them together, then sanding and burning their surfaces before rubbing into them an enamel stain to give them a rusty, time-worn patina. While some of these works appear as abstractions, others are more overt. In one “barb” we see a bird shape that has us wondering if its referent has been displaced by agricultural expansion, in another, a jet fighter, like those on the tarmac at CFB Cold Lake.