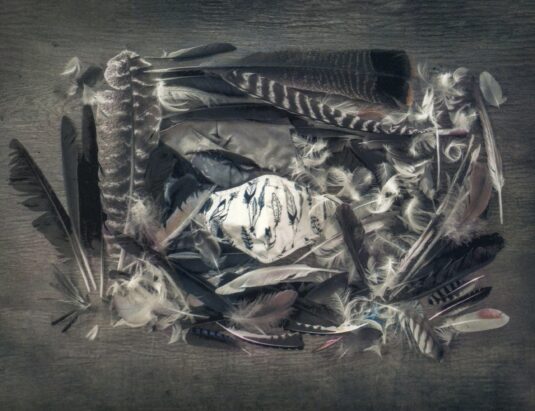 The COVID-19 pandemic has resulted in the deaths of almost six million people and the hospitalization of many more. As with past global disasters (the “Spanish flu” of 1918, the Great Depression, and the two world wars), the pandemic has exposed, if not exacerbated, systemic weaknesses in everything from our social institutions to our stewardship of the planet. In Michelle Leone Huisman’s current exhibition of photo-based still lifes, the disposable plastic mask is both a metonym for the virus and a further instance of our unconscious subversion of the planet and its health.

Inspired by the discovery of a discarded child-sized mask and the nursery rhyme that simultaneously came into her head (“Ring Around the Rosie”), Huisman set to work on a project that, for the most part, pairs rhymes and their related childhood games with elements drawn from the natural world. In an example based on the rhyme “The Elf and the Dormouse,” a holiday season–themed mask is “naturalized” in a setting of mushrooms, moss and leaves. In another, based on a game once played with her sister (“Light as a Feather, Stiff as a Board”), a feather- decorated mask is framed by a selection of feathers left behind by local birds.

Exceptional artworks are often those whose method of production parallels the works’ thematic intentions. Thus it is hardly a stretch to infer that in Huisman’s critique of unsustainable disposability, she has chosen an elaborate printing process – tri-colour gum bichromate over palladium – that is reputed to maintain its quality for up to 500 years. Whether we, as a species,
last that long is hopefully still up to us.