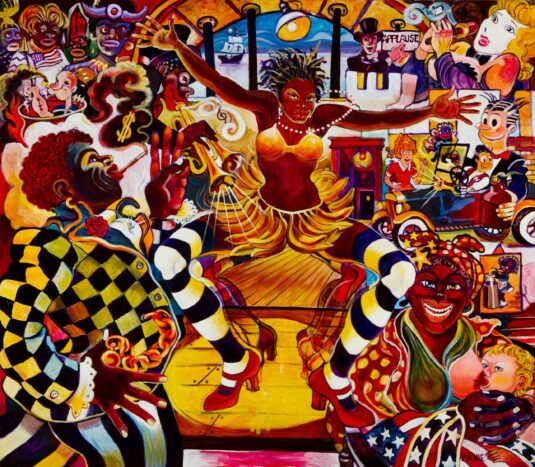 Hallie Ford Museum of Art, Salem, OR - To March 26

Throughout his lengthy career, Arvie Smith has focused on issues surrounding race, identity, systemic injustice and the history of African American culture. The nationally recognized Portland artist and educator was born in 1938 and grew up in the Jim Crow South. Smith’s early experiences of being raised in Texas profoundly shaped his artistic trajectory. This major retrospective features artworks on loan from public and private collections that span a 25-year period of Smith’s oeuvre.

Arvie Smith’s paintings have a distinct vocabulary. He paints in an exuberant figurative style, with a predominantly warm and bold, inviting color palette. His compositions are populated with iconography and complex overlapping narratives that intend to stimulate dialogue. Poignant recollections of how media has shaped public perception are told through portrayals of stereotypes such as Aunt Jemima and the character Buckwheat. Smith’s vivid caricatures harness a multiplicity of storytelling devices to unravel historical inequalities and contemporary oppressions. His paintings can feel playful and humorous at times while also critiquing atrocities.

Many of his large-scale canvases reference the history of slavery, the KKK, segregation, police shootings and interracial relationships. He approaches these complicated topics with an up-front sense of satire and wit that cannot be ignored. As Smith states, “For the entirety of my artistic career, I have sought to transform the African American experience into provocative paintings that depict deep sympathy for the disposed and marginalized in search for beauty, meaning and equality.”

Smith is professor emeritus at the Pacific Northwest College of Art in Portland, where he received his honorary doctorate in 2018. He is a vital part of Portland’s art community. This spring, he will be included in a group show at the Venice Biennale.