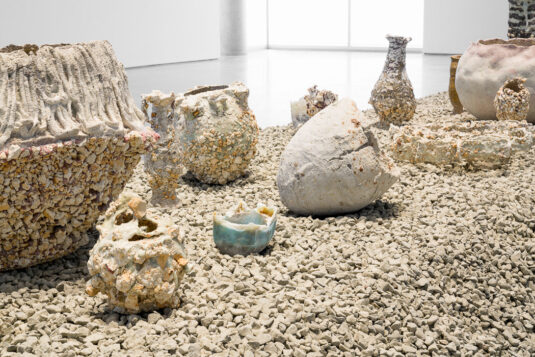 LIBBY LESHGOLD GALLERY, Vancouver BC - To March 29, 2021
(held over as a “virtual exhibition”)

by Michael Turner
Born in Osaka, Japan, in 1982, Masaomi Yasunaga received his formal education at Osaka Sangyo University, where he received a master’s degree in environmental design while studying ceramics under Satoru Hoshino. A noted second-generation acolyte of the vanguardist Sodeisha group, Hoshina encouraged Yasunaga’s exploration of ceramics’ non-functional potential as sculpture. The result is an artist who moves gracefully between art and craft, but who has distinguished himself of late with a work that has more in common with installation.
For his 98-piece exhibition at the Leshgold, Yasunaga presents sculptures on the wall, on plinths, but most spectacularly on a raised bed of gravel, which for all intents and purposes is a midden, like those found at ancient settlements. As one moves closer, the midden effect only intensifies, given the precarious nature of the sculptural objects, which possess all the vulnerability of recently unearthed artifacts. Are these objects vessels? Are they intended to be? Why is it that these sculptures behave so strangely?
A key to understanding the uncanny nature of Yasunaga’s sculptures lies in their material composition. In the words of exhibition curator Cate Rimmer, “Although referred to as ceramics, Yasunaga’s experimentation has led to a process that has removed clay and replaced it with glaze as the primary material element. In order to counter the fragility of the glaze and maintain their form during production, the objects are buried in trays of sand, soil or rocks. Following their wood firing, they are disinterred in a process akin to archeological excavation, a reference that is further enhanced by the way they are installed in the exhibition on tomb-like mounds of rough gravel.”
libby.ecuad.ca