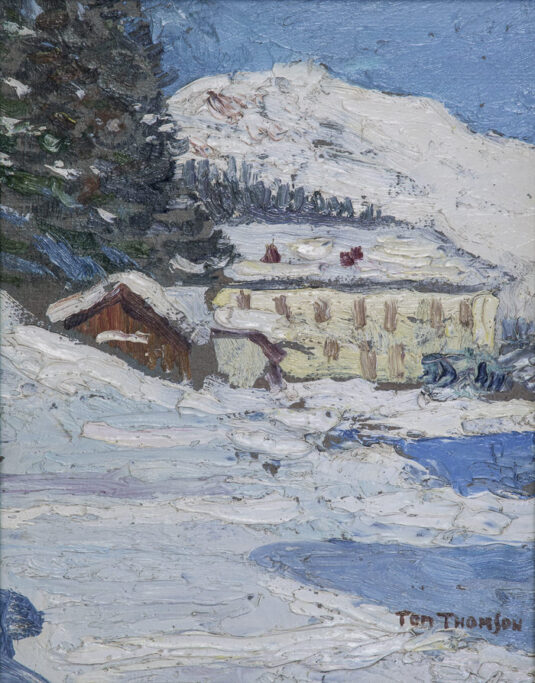 Billed by the Whyte Museum’s chief curator Anne Ewen as a “feast of familiar landscapes,” Drawn to the West features over 90 works in oil, watercolour, photography and mixed media, all focused on that prairie-to-mountain continuum known as the West. Temporally, the works range from “images of hieroglyphics” to “present day creations,” with the best-known examples belonging to Group of Seven painters Frank Johnston, Frederick Varley, J E.H. MacDonald and Lawren Harris. Centring the exhibition are four paintings by unofficial Group member Tom Thomson.
Until 2013, there was no evidence that Thomson had visited the Canadian Rockies. Then the discovery of a small oil painting in a UK shop suggested otherwise. The painting, Thomson’s only alpine landscape, set scholars scurrying. In 2014, two similarly constructed landscapes surfaced. All three were analyzed using techniques developed by the Canadian Conservation Institute, which determined that the paintings were made during Thomson’s lifetime and could have resulted from a hiking expedition he took with mountain guide Jimmy Simpson above Hector Lake in 1913. Based on these findings, a fourth Thomson painting is now believed to depict Canmore’s long-buried Oskaloosa Hotel.
For those eager for more Group of Seven, the Art Gallery of Alberta presents an exhibition in honour of the 100th anniversary of the Group’s first “formal” exhibition, which opened at the Art Gallery of Toronto on May 7, 1920. In addition to works by Group members, 100 Years features their mentors, colleagues and students, an august list that includes Maxwell Bates, Emily Carr, Prudence Heward, Illingworth Kerr, Euphemia McNaught, David Milne, Walter J. Phillips and, once again, Tom Thomson.
whyte.org
youraga.ca