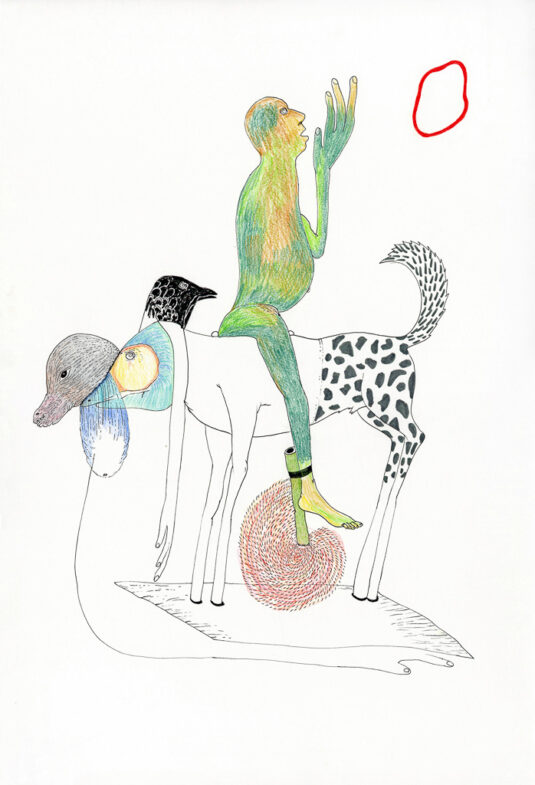 by Michael Turner
Taking its name from the Mayan word for “bat,” the Z’otz* Collective comprises three Toronto-based artists of Latin American heritage – Nahúm Flores, Erik Jerezano and Ilyana Martínez – who meet weekly in a shared studio to collaborate on drawing, painting, collage, sculpture and installation. The three have a common interest in storytelling, as evidenced by their careful use of titles – not to enforce the meaning of their work, but to suggest what is possible when in its presence.
This exhibition was originally conceived as an on-location residency (was there any other kind before the current pandemic?). Oxygen’s Julia Prudhomme proposed in its place an “augmented” program to “ensure the safety of the artists and community, while also offering an intimate glimpse into the collective’s studio.” The result, for those who tune in for updates and online studio visits August 22 to 28, is an intuitive, chance-based rotational method, where members work on different projects concurrently, then exchange them. Here, time and space collapse, allowing for a condition somewhere between essence and existence.
Flores was born in Danlí, Honduras, and immigrated to Canada at age 17. He holds a BFA in drawing and painting from OCADU and has exhibited throughout Canada and Central America. Jerezano, born in Mexico, has exhibited widely and was involved in a number of community-based art projects in Mexico City, where he collaborated on murals. Martínez was born in Toronto and has lived in Pennsylvania, Wyoming and Mexico. She holds a bachelor of design from NSCAD and has participated in design projects at the National Gallery of Canada, Art Gallery of Ontario and National Museum of Art in Mexico City.
oxygenartcentre.org