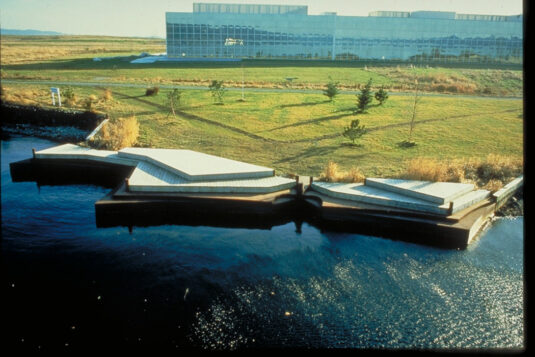 by Matthew Kangas
Seattle’s celebrated heritage of art in public places has led to a number of outdoor sites. One of the most notable is at the Western Regional Center of an important federal agency, the National Oceanic and Atmospheric Administration (NOAA), adjacent to a city property, Warren G. Magnuson Park. Both are situated on the northwest shore of Lake Washington, the state’s longest lake and the city’s eastern boundary.
Richard Andrews, director of public art for the City of Seattle, oversaw a blue-ribbon jury in 1982 for the US government–financed sculpture walk at the newly landscaped NOAA site. The leading municipal arts administrator in the nation at the time (he later went on to head public art at the National Endowment for the Arts), Andrews helped select a prestigious group of artists who met the challenges of the site head-on.
Siah Armajani, Scott Burton, Douglas R. Hollis, Martin Puryear and George Trakas are internationally known American sculptors, although Trakas was born in Quebec. Each took a different approach. For example, Armajani built two bridges inscribed with texts from Moby-Dick, by Herman Melville. Trakas’ Berth Haven is a polygonal dock that extends a cedar deck into the water above steel struts. Burton transformed furniture into sculpture, placing smooth and jagged granite boulders for seating on his Viewpoint Terrace. Puryear poured a concrete dome on top of a grassy mound in his Knoll for NOAA. Echoing Burton, he placed four curved benches surrounding the hillock.
The most popular work is A Sound Garden, by Hollis, named after the well-known Seattle grunge rock group. Twelve 21-foot-high steel towers revolve in the wind at the shoreline and create “music” of their own. Access to the NOAA site is restricted to weekdays, 9 am to 5 pm, with final entry at 3:30 pm. Admission is free but ID is required.