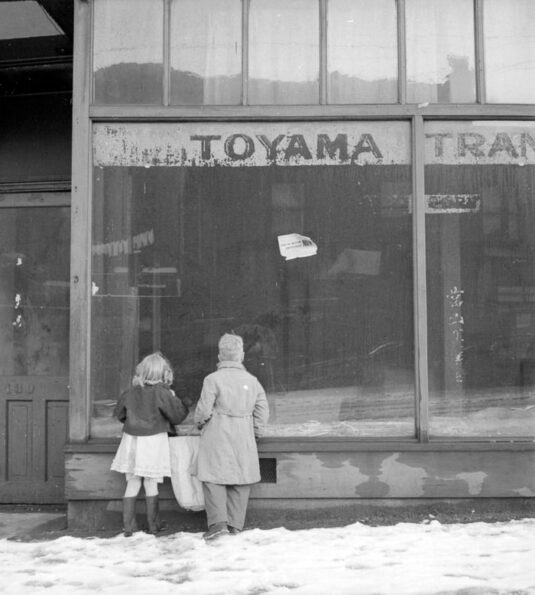 by Michael Turner
The lead image chosen for this exhibition is recognizable to anyone with a passing knowledge of historic race relations in British Columbia: a curbside photograph of a boy and girl, both white and well-dressed, their faces pressed against the window of a darkened Japanese shop. Because the picture is dated 1942, we know that the shop is closed, its property confiscated, and its owner(s) and their families detained, if not already relocated to an interior internment camp. Anything beyond this reading exists within the realm of childhood wonder.
Taking its name from the Canadian federal government’s mistreatment of Japanese Canadians during and after the Second World War, Broken Promises is the result of the Landscape of Injustice’s seven-year multidisciplinary, multi-institutional, community-engaged inquiry into the dispossession of Japanese Canadians in the 1940s. Framed as a story, the exhibition is told through the work of seven narrators, each of whom have specific interests and expertise. Some of these interests are available in didactic form, others embodied within the objects and images on display.
Most remarkable about Broken Promises is its use of photographs, specifically those housed in the City of Vancouver Archives, where the lead image was sourced. Those curious about this photograph can easily access it online. The photo was taken by Jack Lindsay, a news photographer with the now-defunct Vancouver News-Herald, where it was presumably published. As for the story that ran with the picture, that too is presumable. Suffice it to say, the erroneously titled “Children looking in the window of a Japanese store, closed after the relocation of Japanese nationals” now tells a different story.
centre.nikkeiplace.org