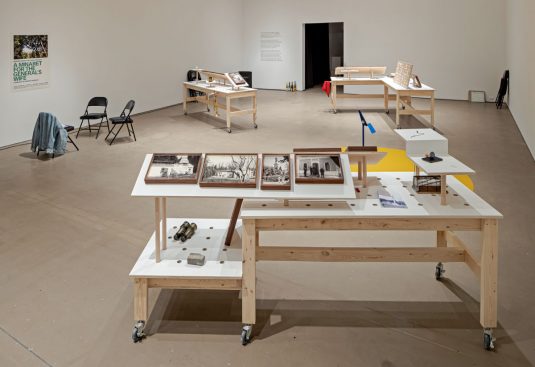 It is no surprise that in an era when presidents dismiss inconvenient truths as “alternative facts” and retailers justify price hikes through “disruptions” in the supply chain, writers and artists are making something of these political and economic strategies in their work. In literature, we accept autofiction as a hybrid genre that celebrates the imaginative mind as an extension of personal biography, while in the visual arts, Erdem Taşdelen, A Minaret for the General’s Wife, Mercer Union, 2020, installation view such fusions have yet to be formalized. If a case could be made for a visual art equivalent, Turkish Canadian artist Erdem Taşdelen would be among its practitioners.

Taşdelen’s current exhibition began when the artist discovered a free-standing minaret on a Turkish travel blog. Located in Lithuania, the minaret was in the Ottoman style, yet it was not attached to a mosque, nor was it in a country that was once part of the Ottoman Empire. Taşdelen’s interest in the minaret resulted in an artist residency in Vilnius, where he had access to Lithuania’s State Historical Archives and the Kėdainiai Regional Museum, and where he learned that the minaret had more than one origin story, that who you are is determined by which version of events you subscribe to.

Presented as an installation, the exhibition features archival photos, related artifacts, a Turkish-language call to prayer recording, and a video the artist shot at the site of the minaret. Overall, the design of the installation is intended to suggest a theatrical rehearsal space where the viewer is free to act upon its elements, as if they were pages from an unfinished script.