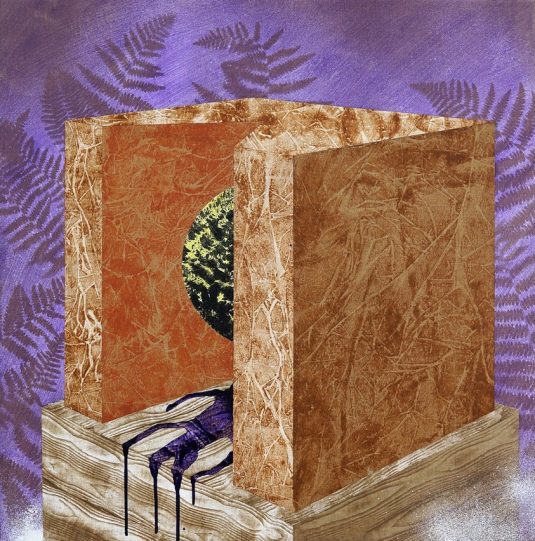 A “painter’s painter” is a description applied to a painter other painters admire: those who have mastered a number of the discipline’s techniques, and yet whose innovations often go unnoticed in the mainstream press. Vancouver-based Sean Alward would be such a painter, if his work wasn’t so relevant to today’s climate crisis. For Alward, painting does not begin with the squeezing of the factory-made paint tube. It is the very materiality of “paint” and its natural and social-historical contexts that has a painting in process before the first brush is dipped.

A number of years ago, Alward began mixing his own paints, adding to store-bought oils and pigments materials he gathered on walks. In forests he found algae; on pastures, pollen; along rail lines, coal – all of which were deployed relative to the thematic content of his highly imaginative, research-driven projects. In this sense, Alward could be considered a “conceptual painter,” a pairing some might find oxymoronic given painting’s romantic associations. But what could be more romantic than those walks?

The paintings in Alward’s current show were inspired by one of Alward’s teachers, Hans Haacke, whose Condensation Cube (1963-68) consists of a sealed, transparent acrylic cube containing a single centimetre of water. The difference between inside and outside temperatures results in an ever-changing array of condensation droplets, forming an open-system artwork that is forever remaking itself. For his most recent paintings, Alward combined one of the planet’s oldest plants (the fern) with one of its first, and dirtiest, fossil fuels (coal), which itself is derived from decaying plant matter. As with most conceptual works, you get the idea – except these paintings must be seen to be believed.