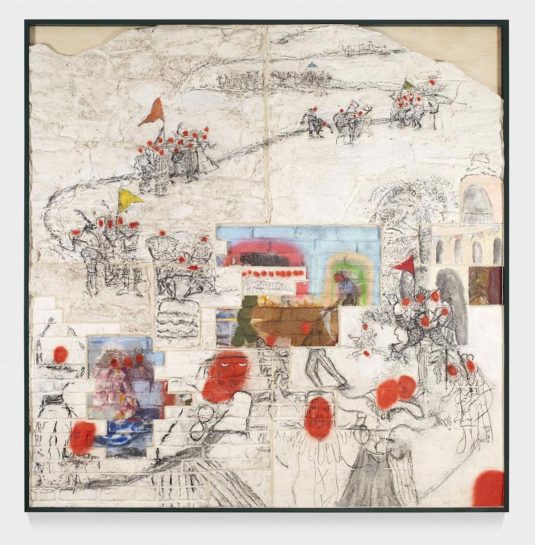 Born to Trinidadian immigrant parents in Edmonton in 1979, Curtis Talwst Santiago worked as a musician before he came to attention in the mid-2010s for his miniature dioramas. Set inside hinged jewel boxes of varying sizes (for rings, wristwatches, necklaces, etc.), Santiago’s dioramas elaborate on worlds drawn from headlines, myth, personal reminiscences and visions. Though his approach to art making is grounded in the improvisatory nature of his musical experiences, Santiago received formal art training at Emily Carr University, followed by an apprenticeship with Salish artist Lawrence Paul Yuxweluptun.

For his current exhibition, Santiago has focused on carnival and its importance to Trinidadians as a celebration of life and a medium of cultural transmission, with a particular emphasis on J’ouvert. The official start of carnival, J’ouvert is the sunrise parade that takes place on the Monday before Ash Wednesday. Participants paint their bodies and faces and clothe themselves as Jab Jabs, trickster figures who embody a complicated range of behaviours, from the joyous to the ferocious.

Though Santiago continues to make his jewel box dioramas, he has in recent years received an equal amount of acclaim for his expressive drawings and large-scale, mixed-media (spray paint, charcoal, oil, acrylic, cast paper and pastel) paintings, which he often presents on another ready-made form of support: scaffolding. In an interview conducted by New York’s Drawing Center, on the occasion of his March 2020 exhibition, he said, “Scaffolding is, for me, such an important tool. It’s almost like charcoal, in a sense, as one of the oldest materials for building. The patina on the scaffolding interests me as much as the paintings.”