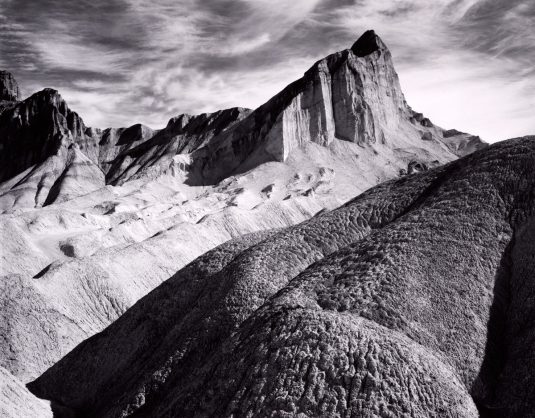 Museum of History and Industry, Seattle - To Sep 5

Forty-eight black-and-white photographic prints hand-selected late in life by Ansel Adams (1902-1984) make up Ansel Adams: Masterworks. Considering how rare it is for an artist to retain control beyond the grave as to how their work is viewed, this exhibition is extraordinary. Adams, now more American hero even than artist, attained his position of guru-father of the environmental protection movement through his photographs, cementing Americans’ vision of nature.

One surprise among many is the breadth of subject matter and variety of locations Adams photographed. His photograph is the one that pops into our mind when we hear the words “El Capitan” (the legendary sheer rock face in the Sierra Nevadas). That is, visitors will recognize many sites – New Mexico, Colorado, Cape Cod, Alaska – without ever having traveled there largely because of Adams’ ubiquitous images.

As Adams’ stature as an environmental activist grew, he became akin to a sage and prophet. The best example of this is The Golden Gate Before the Bridge, San Francisco, California (1932), which radiates a melancholy beauty.

Given current sensitivities about original ownership of lands turned into national parks, viewers may ask about Indigenous and ethnic representations. They are there, to be sure, as in Spanish American Woman, near Chimayo, New Mexico (c. 1948) and Trailer Camp Children, Richmond, California (1944). Adams’ attention to surrounding detail rather than neutral backdrop roots these subjects in a timeless reality.