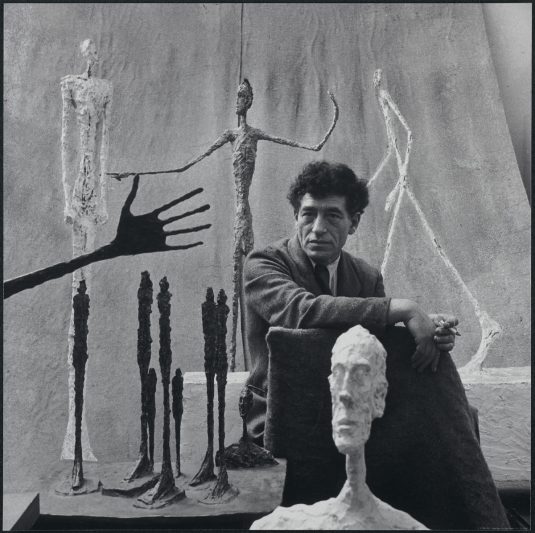 One of the most distinguished artists of the 20th century, Alberto Giacometti is best known as a sculptor. In the decades following World War II, when Abstract Expressionism was the dominant movement in art, Giacometti diverged from the mainstream to focus on the figure. By attenuating the human form, minimizing color and emphasizing the texture of his materials, he abstracted the figure to create emotionally powerful works.

Alberto Giacometti: Toward the Ultimate Figure covers the years from 1945 to 1966,  an important period in the artist’s evolution, when he developed the Walking Man and the Alberto Giacometti in his studio, 1951 Standing Woman, stark elongated figures that became his signature.

The 60-plus sculptures in this exhibition include many of these iconic figures, alone and    in groups. Some are captured in architectural volumes defined only by lines; they constitute self-contained minimalist landscapes. A classically trained artist, Giacometti sculpted heads and busts modeled on friends and family, and later from memory or dreams. Like the figures, these portraits are stretched and distorted. Giacometti’s creative practice encompassed literature and philosophy as well as visual art. In the 1920s and ’30s, he aligned himself with the Surrealists, but in the postwar period he turned to Existentialism, a philosophy that questions the agency and mortality of the individual. The mood of isolation and alienation evoked by his sculpture is thought to express this philosophy.

In addition to sculpture, the exhibition includes paintings, works on paper, and more than 60 photographs. Some of the photographs document artworks, but the most insightful capture Giacometti at work in his studio, many taken by photographers who were also prominent artists.

Although Giacometti was acclaimed in his lifetime and is widely represented in museums and private collections, since his death in 1966, there have been few exhibitions of his work. Organized by the Fondation Giacometti in Paris and the Cleveland Museum of Art, Alberto Giacometti will tour to four North American museums; Seattle Art Museum is the only West Coast venue.