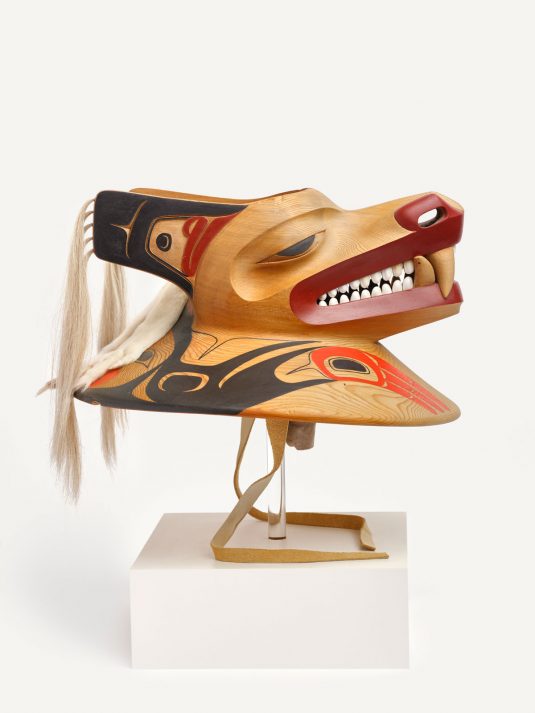 The excitement generated by Wolves, a 50- year survey of the work of Tahltan-Tlingit artist Dempsey Bob, is palpable. Throngs of art lovers attended the show’s opening in early April and many more visitors are expected this summer. Bob is internationally acclaimed, not only for his obvious talent and technical skills but also for his deep knowledge of his ancestors’ visual culture and oral histories. He is lauded for moving tradition forward through the innovative and highly personal style he has developed. With their torqueing of form, polished surfaces and characteristically heavy-lidded eyes, Bob’s carvings are instantly and unforgettably recognizable.

Speaking to Preview by phone, the Terrace- based artist expressed his delight at seeing more than 100 of his works – including masks, panels, jewelry, ceremonial regalia, and sculptures in cedar, alder and bronze – together in one place at one time. “I don’t think it will happen again,” he said, then added with a laugh, “It was very difficult prying the works out of the hands of the collectors.”

On loan from both public and private collections, much of this art has not been widely seen before. Even Bob lost sight of some of his creations. He told of encountering a mask displayed in a vitrine along with other, older works. “That one little mask was looking at me. I felt like he was saying, ‘Where have you been, Dad? It’s been 40 years.’ ” He added, “I drew every line, carved every line, thought about how to bring the form out.” In the intimacy of this creative knowledge, he says, the sculptures are like his children. “And then you have to let them go out into the world.”

And out into the world they will go. After the show’s run in Whistler, a smaller version will tour to the McMichael Canadian Art Collection in Kleinburg, Ontario; the Montreal Museum of Fine Arts; and the Kelowna Art Gallery.