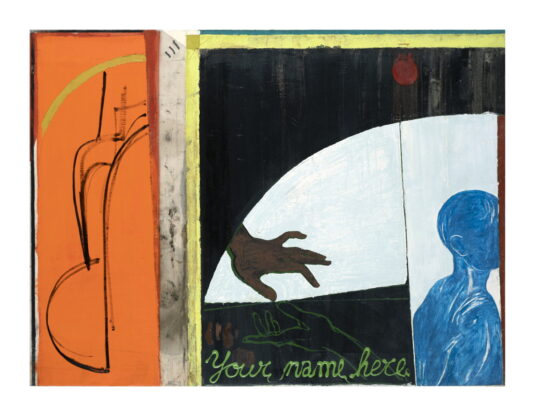 HERRINGER KISS GALLERY, Calgary AB - Sep 12 - Nov 2
by Michael Turner
Those who remember Attila Richard Lukacs from Vancouver’s early-1980s art scene might recall a painter who, though still in art school, had emerged an Old Master. Yet while the influence of Michelangelo Caravaggio, Jacques-Louis David, Giotto and Rembrandt was apparent in the artist’s large, elaborately worked canvases, their subject matter had more in common with homosexual dungeon play than with anything commissioned by the Church. But rather than pursue this tack, and make his fortune as a fetishist, Lukacs branched out, something he continues to do as an artist in pursuit of his art.
For his current exhibition, Lukacs is displaying a series of never-seen-before collage paintings from 2013-14. This work, like much of his work over the past 10 years, is less interested in figurative depictions of masculine acts than in documenting his ongoing technical inquiries and researches. In that sense, and despite the paintings’ abstracted nature, they feel more like self-portraits, with the artist inviting us to add “Your Name Here” if we see in these canvases what he might see in himself.
One of the more remarkable aspects of Lukacs’ storied career, what many art lovers consider a gift, is his trajectory. Although some might associate Lukacs’ earlier “Old Master” works with the culmination of a life of learning, Lukacs has reversed the process, insisting that the artist must always remain a student. We have seen this, for example, in his later exploration of Indian and Middle Eastern miniature painting. Those who continue to pine for the spectacle of early-1980s Lukacs do so only for the paintings, not for the artist and his art.
Opening reception Sep 12, 5-8pm
herringerkissgallery.com