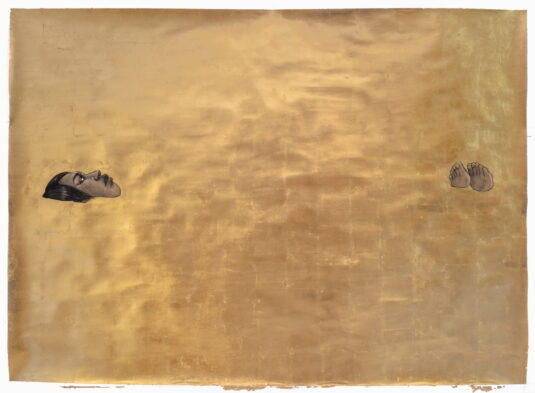 KOPLIN DEL RIO, Seattle WA - To Sep 28
by Matthew Kangas
A leading contemporary African- American artist, Robert Pruitt has been included in the Whitney Biennial as well as important solo and group exhibitions in New York, Chicago, Los Angeles, Dallas and Houston, among others. His art is on view at the US embassy in Harare, Zimbabwe.
In his second show at Koplin Del Rio, Pruitt mixes his themes of ancient Egyptian history and African-American futurism. With Black Americans long under siege, it is not surprising that painters and poets have envisioned a sovereign African-American science fiction world – a kind of escape from Planet White. In this iteration, Pruitt sent from New York nine recent largescale drawings of urban denizens, from street crews to couples to seated and prone individuals who recall Egyptian burial rites (Sarcophagus), funerary headdresses (Woman with Tiara), and repurposed Roman gods and goddesses (Mars, Saturn and Ganymede).
Drawn, not painted, the portraits retain a provisional, urgently temporary character, as if there were not time to do a full portrait. Poses are directed away from the viewer, suggesting part pride, part insolence, and part distraction from unpleasant news. Body parts like legs or even an entire torso are cropped or omitted altogether, summoning up magazine illustrations or snapshots. With blurry backgrounds often painted in diluted co ee or, in Sarcophagus, completely covered in gold leaf, the fi gures exist midway between life and death, consciousness and eternal sleep or space-age time travel.
Despite Pruitt’s allusions to spiritual transcendence and planetary escape from danger, his figures are identifi able, dignifi ed individuals posing as the artist’s fantasies of ancient and futuristic deities ready to be revered and respected today.
koplindelrio.com