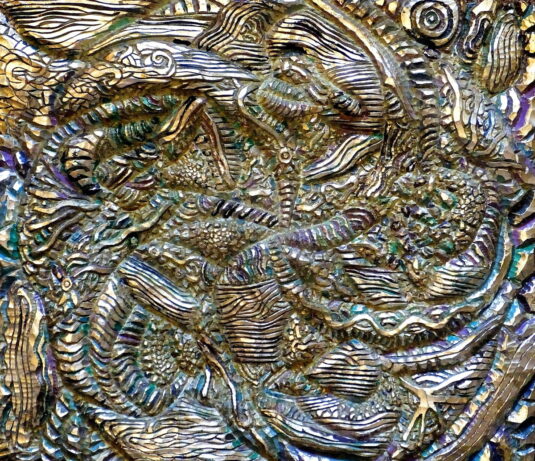 Journey to the Third Dimension: Tom Cramer’s Drawings and Paintings 1974-2019

JORDAN SCHNITZER MUSEUM OF ART, Eugene OR - To Dec 29
by Allyn Cantor
Tom Cramer started drawing as a pastime during music theory class at age 13. The iconic Northwest artist is well known for both his vibrant outdoor murals and his finely carved wood-relief paintings, which he exhibits regularly. The Portland native first studied wood carving with Manuel Izquierdo at the Pacific Northwest College of Art. After graduating Cramer spent time in New York City in the mid-1980s at the Pratt Institute, where exposure to street art culture and figures from the East Village art scene such as Keith Haring and Jean-Michel Basquiat would become influential to his style.
Cramer’s oeuvre is versatile; the artist has worked in a plethora of media throughout his career. In the 1980s he painted an old Vespa to keep occupied during an ice storm. He rode it around town and soon was taking commissions for painted art cars and outdoor murals. In the 1990s Cramer worked on ballet sets, and in the mid-2000s he began a series of painted wood-burnings.
This exhibition includes some very early drawings from Cramer’s teenage years that were recently rediscovered in the artist’s archives. These simple yet dynamic line drawings serve as the basis for Cramer’s artistic output. They exemplify the thread of pictorial and thematic ideas that runs through his two- and three-dimensional artworks.
Cramer’s sentiment on his varied techniques is that “the medium is the message.” His paintings are bold and colorful, with a pop art-like sense of fun, while his gilded relief carvings are intricate reflections that explore the many layers of nature, humanity and spirituality. The artist correlates his serious relief carvings to classical music and his lighthearted paintings to happy styles of pop music.
jsma.uoregon.edu