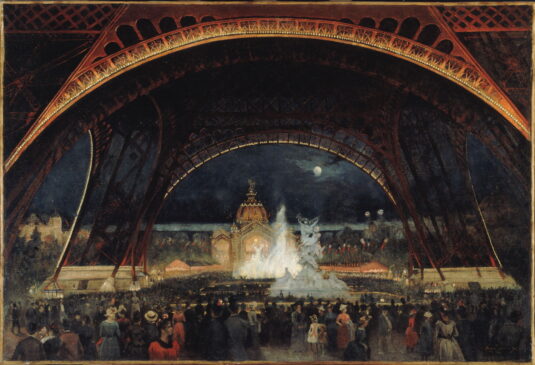 PORTLAND ART MUSEUM, Portland OR - Jun 8 - Sep 8
by Allyn Cantor
This exhibition celebrates a time of flourishing achievements and prosperity, known as the Belle Époque or “Beautiful Age.” Paris hosted the International Exposition in 1900, attracting millions of visitors to the French capital just over a decade after the Eiffel Tower had been erected for the 1889 World’s Fair. This era surrounding the turn of the century saw great advancements in the arts and sciences as well as opulent social and cultural developments that made Paris a unique entertainment center.
Iconic places like the Moulin Rouge became landmarks of a socially vibrant city that are still relevant today. Societal shifts such as the popularity of the bicycle brought on bifurcated clothing for the modern French woman – just one of the many fashion-forward innovations that occurred at this time.
The show tells a story of a highly spirited, yet rapidly changing city by recreating the atmosphere of the era through a series of thematic vignettes. “Paris: The World’s Showcase” highlights the feats of architecture and technology that transformed the cityscape at the turn of the century. “Capital of the Arts” shows the range of talent among both well-known and lesser-known artists working at the time, including Camille Pissarro, Auguste Rodin and Camille Claudel.
The Art Nouveau movement that popularized nature-inspired motifs and curvilinear forms in the decorative arts is shown through stunning examples of furniture, pottery, ironwork, jewelry, posters and other accessories. The mastery of French fashion and la Parisienne (the Parisian woman) is told through textiles and artworks, while “A Walk in Paris” shows how new modes of transportation like the bicycle and omnibus changed the city lifestyle. The fi nal theme of “Paris at Night” boasts the entertainment culture of theater and cabaret as well as the great French invention of moving pictures. The traveling exhibition originated from the Petit Palais Museum of Fine Arts and includes pieces from several other Paris museums.
portlandartmuseum.org