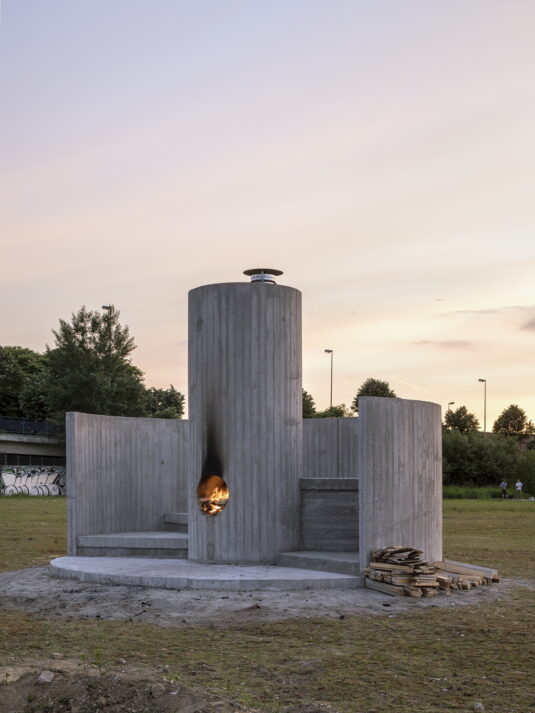 BELLEVUE ARTS MUSEUM, Bellevue WA - To Sep 15
by Matthew Kangas
Following on a Seattle Art Museum show with his brother, Elias Hansen, the new show from Oscar Tuazon, Collaborator, emphasizes his other partnerships, with artists, artisans and architects – BAM’s building designer, Steven Holl, in the latter case. Raised in humble circumstances in Indianola, Washington, Tuazon moved to Paris after attending Deep Springs College in California. He began a series of eye-popping installations with and without his brother at prestigious European contemporary art centers in Germany, England, Switzerland, France, the Netherlands and Italy, where he was a hit at the 2012 Venice Biennale.
The 2001 Holl building interior has been transformed by Tuazon as he recreates several installations with other artists, thus having the building function as container for a mini-retrospective, a first for an artist so young (he is 44). Drawing upon recycled materials such as wood, beer bottles, glass and plaster, Tuazon constructs sheds, towers and other seemingly makeshift rooms and sites that relate to architecture yet challenge its permanence and monumentality. Lighting fixtures join computer prints, photographs and watercolors (some by Holl of the BAM building) in a trail of event-related objects that stand in for performances or temporary stagings of older works.
Now living in Los Angeles, Tuazon runs the Los Angeles Water School, another artists’ collaboration venture and continues to concentrate on an aesthetic of dismantling architecture while drawing attention to its essence, like the bones of Holl’s building and how its floor plan alters daylight entering the structure. The exhibition title, Collaborator, implies Holl and the building are the passive participants to the overall conglomeration. It echoes earlier architecture-altering projects at the Institute of Contemporary Arts in London and Kunsthalle Bern. Allusions to industrial shipping containers, for example, and housing for the homeless tease the viewer into entering the small spaces to experience how design and art a ect our body images and limits of perception. Sculpture is, in this way, always a collaborator, dependent upon, but enhancing, existing built structures which, in turn, relate to exterior landscape or studio conventions.
bellevuearts.org