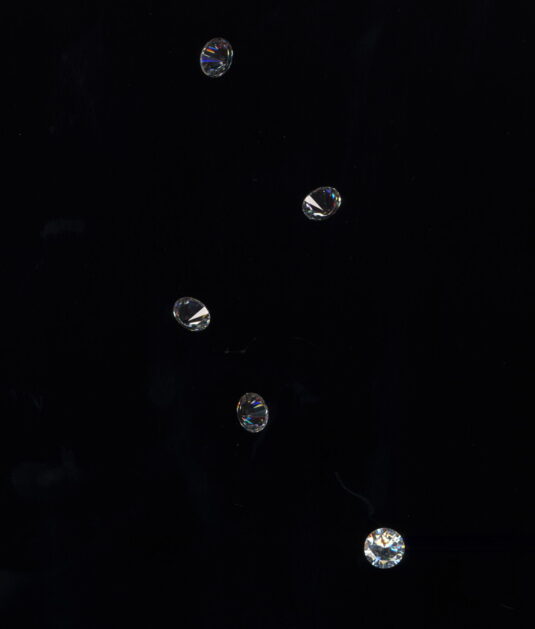 SFU TECK GALLERY, Vancouver BC - To Apr 26, 2020
by Michael Turner
Before it was a major label-loathing 1990s punk band, fugazi was in heavy rotation as an Italian-derived slang word for “fake.” For Vancouver-based artist Evan Lee, “fake” is not so much a point of departure as are the gems to which the word is most often applied.
In consideration of his current exhibition, Lee focused his attention on the Teck Gallery’s massive northeast-facing picture window overlooking the historic resource port of Burrard Inlet and the “supernatural” Coast Mountains beyond. Rather than compete with the window, Lee chose to include it as part of a more pressing conversation. To do so, he enlarged a series of scans he had made of cubic zirconia to window-sized proportions, placing them in line with the window’s horizon. With a shared architectural language in place, and a scale that magnifi es the fracture and distortion of these “synthetic diamonds” to glorious proportions, the conversation turns from artistic intentions to ethical dilemmas concerning landscape and development, sustainability and extraction, market fear and market faith.
Lee is an important voice in Vancouver’s post-photo, image-based art community, and his innovative “captures” have been exhibited at the Vancouver Art Gallery, Presentation House Gallery, Contact Photography Festival, Le Mois de la Photo à Montréal, Liu Haisu Art Museum and Confederation Centre of the Arts. Reviews and features have appeared in Border Crossings, Flash Art International, Lapiz International Art Magazine, Yishu Journal of Contemporary Chinese Art, Canadian Art and Art on Paper. He was shortlisted for the Sobey Art Award in 2014 and has undertaken numerous public art commissions.
sfu.ca/galleries