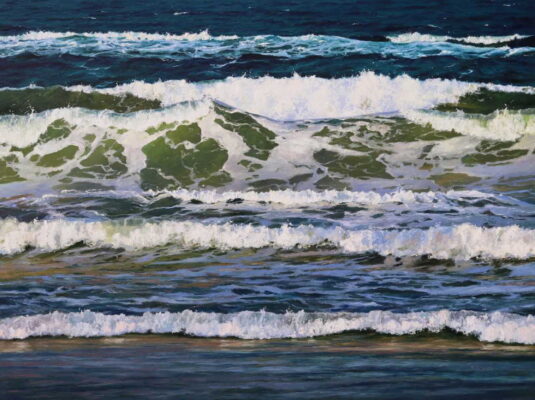 IAN TAN GALLERY, Vancouver BC - Jun 1 - 30
by Michael Turner
It is a source of wonder that those who claim indifference to abstract painting can pass an afternoon at a beach staring at its waves. Perhaps the difference lies not in the singularity of each incoming wave but, like flames in a fireplace, their variability. It might also explain why the most common genre of painting to be found above a fireplace is the seascape. Thoughts like these come to mind while staring at the seascapes of Erika Toliusis.
Born in Montevideo, Uruguay, in 1969, Toliusis studied at the Círculo de Bellas Artes, in Madrid, and the Worcester Art Museum, in Massachusetts, before moving to Vancouver, where she currently resides. Although she is known for panoramic landscapes made during her travels in India, the Himalayas, South America and Canada, Toliusis’ current exhibition takes as its subject that most kinetic of geographical forms, what Ian Tan likens to the “pulsating tide of our planet inhaling and exhaling” – “a Zen motif analogous to thoughts appearing and disappearing in the mind.”
Rather than provide a series of pleasing dead-on shots of incoming waves framed bottom-to-top by beach and sky, Toliusis opts for a range of perspectives. In Nautilius 1 (2019), we experience the gentle chop of waves at sea, a destabilizing e ect that asks more of the viewer’s point of view (Am I on a boat? Am I a bird?) than a beach-crashing wave might imply. Same too for the equally horizonless Bahía (2019), where the focus is not on where one stands in relation to the violence of these breaking waves, but on the waves’ come-hither approximation of a stairway.
iantangallery.com