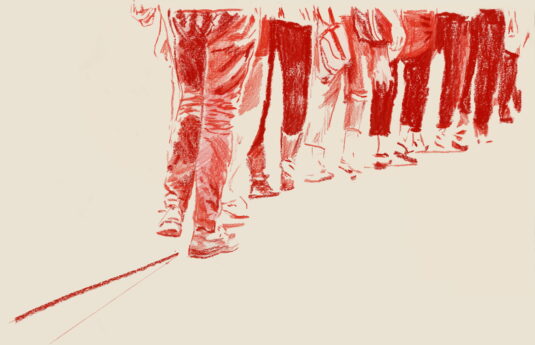 WALTER PHILLIPS GALLERY/BANFF CENTRE, Ban AB - Jun 15 - Aug 25
by Michael Turner
Social practice is arguably the first significant 21st-century art movement. While galleries and museums struggle with its ambivalence – and challenge – to the authority of the white cube (as they did with Marcel Duchamp’s readymades at the beginning of the 20th century, and conceptual and land art in the late ’60s and early ’70s), the “problem,” as usual, remains not with the artist but with the institution. One artist for whom institutional access can be as much a physical problem as an aesthetic or philosophical one is Carmen Papalia.
Like many artists working in social practice, Papalia begins with a carefully crafted self-definition. Rather than accept a medical-legal designation of himself as “blind” or “visually-impaired,” he prefers the more dialogical “non-visual learner” – a distinction that eschews disability (a lack) in favour of identity as a proactive subject working in relation to public institutions and their promise of “social accessibility.” As a theorist, Papalia has built from this proposition a conceptual framework that he calls Open Access. As an artist, he enacts its tenets through performance.
For Guidelines, Papalia and collaborating artist Heather Kai Smith have produced an animation and a series of pastel drawings that “visually interpret” Open Access. In the drawing Open Access: Claiming Visibility (2019), a line of bodies step diagonally from the foreground, out-of-frame from the waist up. Those familiar with Papalia’s performances will recognize this document as Blind Field Shuttle (2010-), where the artist invites participants to hang on behind him as he leads a walking tour through a city as unfamiliar to him as his “passengers” are to non-visual learning.
banffcentre.ca/walter-phillips-gallery