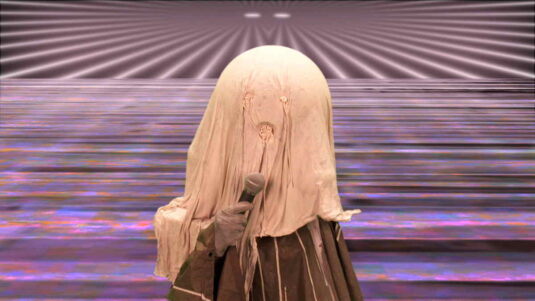 IT ONCE HAD A FACE, NOW IT WANTS ONE AGAIN

DELUGE CONTEMPORARY ART, Victoria BC - June 6 - July 11
by Christine Clark
Jennet Thomas, based in London, England, is an artist and a filmmaker who creates deeply bizarre films presented alongside elaborate sculptural installations and live performance. Her work has been shown at Tate Britain and MoMA. She currently lectures in time-based media and performance at Wimbledon College of Arts. Thomas is a co-founder of the Exploding Cinema Collective (c. 1991), a group of low-budget, financially independent filmmakers striving to replace “elite professionalism with open access and uncensored expression.”
IT ONCE HAD A FACE, NOW IT WANTS ONE AGAIN is part 2.5 in a three-part series called ANIMAL CONDENSED>>ANIMAL EXPANDED. Thomas writes that “these visionary fever dreams explore the possibilities for artistic resistance to the corporatisation of forms of life, both animal and human. They take the form of a loosely inter-related series, colliding a number of genres: science fiction, mock-documentary, absurdist satire and video art.”
Set two billion years in the future, IT ONCE HAD A FACE, NOW IT WANTS ONE AGAIN is described on Thomas’ WordPress site as “an installation of objects and video in which cloth and string, song and dance, costumes and goo collaborate to fi nd new ways of moving in bleak time.” In the time of COVID-19, however, this iteration will include only projectors and monitors, so gallery visitors can more easily adhere to social distancing recommendations.
Thomas’ films are wildly absurd (almost embarrassingly so) and yet utterly compelling. Thomas has said, “I hone down the narrative to incidents that have a meaning of which the roots feel very ambiguous as to how it got to be meaningful. It really hovers between things and it’s not very easy to explain, it’s the way it functions. So, there are lots of levels of ambiguity going on and there’s an opaqueness as to how things function in the way they do: in a poetic way.”
Open Thu to Sat, noon-5pm
deluge.ca