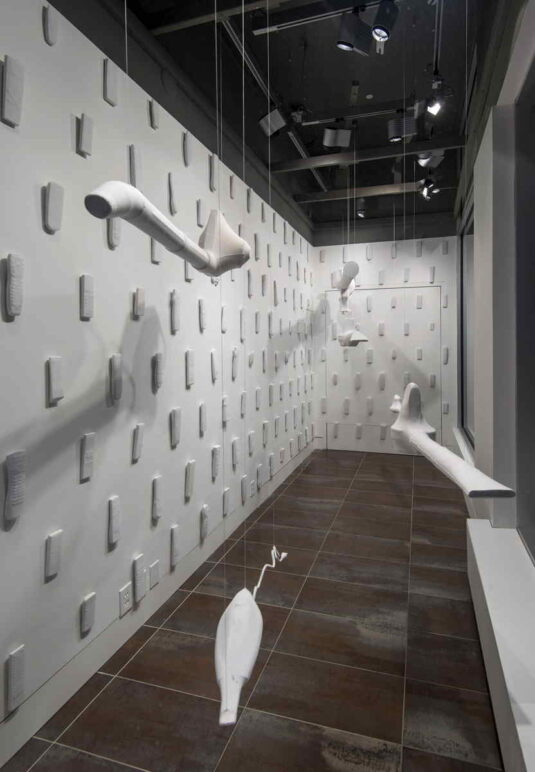 ESKER FOUNDATION (in conjunction with The New Gallery), Calgary AB - To Aug 9
by Michael Turner
A highlight of Mike Nichols’ 1967 boomer spoof The Graduate comes when Mr. McGuire takes aside the just-graduated Benjamin and offers him some unsolicited career advice: “Just one word: plastics.” Confused, Benjamin asks him what he means, and McGuire says, “There’s a great future in plastics. Will you think about it?” Of course, he doesn’t. At least not then. But a growing number of us today (boomers included) are giving a lot of thought to plastics and their festering presence in our landfi lls and oceans. Artist Anna Gustafson is among this group.
Mounted in the Esker Foundation’s exterior Project Space is the current iteration of Gustafson’s Object Lessons (2017-), an ongoing work of sculptural installation that has the artist gathering up discarded consumer goods and, in the way many cultures prepare their dead for the afterlife, shrouding them in cloth – in this instance, meticulously fi tted white linen. For this exhibition, Gustafson’s largely plastic objects are divided into two formats: an L-shaped white wall of evenly spaced remote control devices and, hanging from wires before them, fi ve leaf blowers.
Evocative of Kelly Wood’s Continuous Garbage Project (1998-2003) and Brian Jungen’s repurposed plastic-chair whales, Object Lessons distinguishes itself in two ways. First, through the attention it pays to human labour – the time it takes to shroud devices that, ironically, were designed to save us from it. Second, by enhancing the formal qualities of everyday objects whose purpose is not to be looked at, like a fi nely carved work of art, but pointed at as something we want to go away – be it an oft-seen episode of The Jetsons or the leaves piling up in the driveway.
eskerfoundation.com