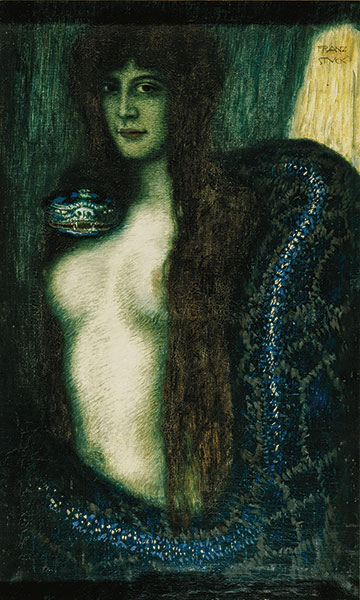 FRYE ART MUSEUM, Seattle WA - To Sep 20
by Matthew Kangas
For the past decade, curators and directors at the Frye Art Museum, a privately funded free-admission institution open seven days a week, have been authenticating, conserving and displaying examples from the Founding Collection. These are paintings acquired by Charles and Emma Frye, who made a fortune in the meatpacking business in Seattle. Concentrating on Northern European, German and Austrian paintings of the 19th century, the Fryes favored landscapes, domestic farm animals and, importantly, the female figure. After their deaths, the museum opened in 1952; the building was completely renovated in 2007.
For Unsettling Femininity, guest curator Naomi Hume of Seattle University has focused on late-19th-century images of all manner of women – nymphs, actresses, biblical heroines and fin de siècle sirens, as in Sin (c. 1908), by Franz von Stuck. This work is the most famous in the collection, one of seven versions painted by von Stuck in Berlin. There it was seen by thousands of viewers, including the 19-year-old Edvard Munch, an art student from Norway who became the most famous Northern European painter of the 20th century. Sin’s notoriety centered on the thick python draped around the model’s neck, in sickly green tones (Is she Eve?). But Hume has set the work beside more positive visions, including Ecstasy (1903) and Voluptas (1897) by Franz von Lenbach, Stella (1889) by Gustav Majer, and Sun Maiden (c. 1909), by the rare woman artist in the collection, the American Lillian Genth.
Delightfully morbid and kinky, other works are indeed “unsettling.” Gabriel von Max painted The Christian Martyr (1867) to depict another “breathless, pale” woman who “provoked ‘horrified fascination’ and ‘shudders of delight,’” as Hume points out. Susanna and the Elders (1866) is Victorian pornography, a scene of geriatric voyeurism by Franz Xaver Winterhalter, Queen Victoria’s favorite artist and a royal family portraitist.
fryemuseum.org