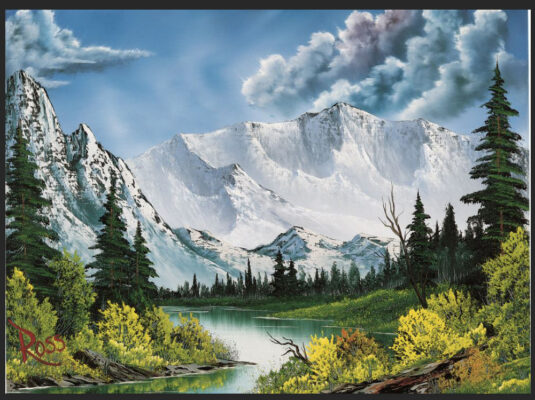 PENTICTON ART GALLERY, Penticton BC - Jul 3 - Sep 15
by Michael Turner
Between 1983 and 1995, artist Bob Ross hosted The Joy of Painting, an art instruction show that aired on PBS affiliates throughout North America. For a half hour each week, viewers tuned in to watch the soft-spoken Ross turn a blank canvas of 18 x 24 inches into an uninhabited natural landscape. Homemakers watched in earnest, slackers with irony. Today, Ross is a cultural icon, enabled in no small part by YouTube, where episodes like “Island in the Wilderness” have received in excess of 27 million views.
The title Happy Little Accidents is one of Ross’ trademark comments for what can go right when a mistake is made. Billed as “the largest Bob Ross exhibition in history,” the show features not only the alla prima paintings Ross made “live” on TV, but also those he painted in advance of each episode and placed beside his easel for reference. In addition, there was always a third (or “book”) version: the canvas he painted after the episode was taped, but in greater detail. Of the 32 works on display, most feature variations of sky, mountains, lakes and streams.
Also available are materials that give a sense of Ross’ life (he passed away in 1995) and the comments he was known for, some of which, like “happy little accidents,” have become go-to catchphrases. Among the more Zen-like quotations that have entered the imaginary are “Let’s build us a little mountain today” and “I don't know exactly where land’s going to be and water’s going be, so we’ll just cover it all with water, and if we want a tree to live here or here, we’ll just drop it in.”
pentictonartgallery.com