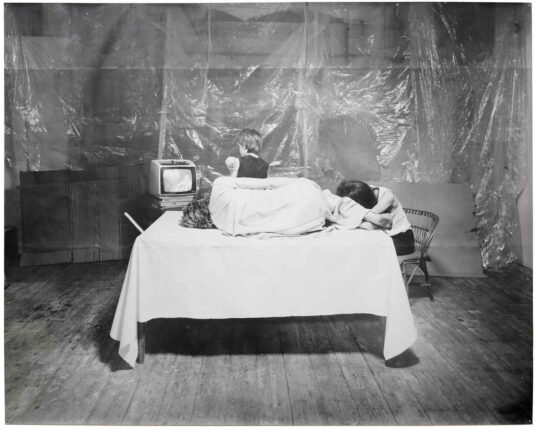 HOWARD495, Vancouver BC - Through Aug (by appointment)
by Michael Turner
Guest curated by artist Stephen Waddell, recipient of the 2019 Scotiabank Photography Award, Wait Until Dark “attempts to describe some portion of the relationship of figuration, realism and photography.” This “portion,” as it were, is considered in the context of a post–World War I tendency to question representation’s “ability to convey the unrepresentable,” and in its place propose an aesthetic mode (abstraction) better suited to “expressing more about our enhanced presence and diminished existences as humans.” With that in mind, Hannah Collins’ Money, Death and Industry (1986) serves as the exhibition’s exemplar.
At 92 x 115 inches, Money, Death and Industry is the largest work in the gallery and the first thing one sees upon entering it. A silver gelatin photograph mounted on linen, it features three figures (four if we consider the figure “represented” on the picture’s television screen) engaged in what might be described as contemplative behaviour. Just what is being contemplated is coloured by the stark, if not surreal, non-representational theatrical set, where the clear plastic backdrop catches within its folds evidence of the production’s unseen lights. Taken as a whole, the work serves to reimagine, if not enchant, the other 10 works in the exhibition.
Among these works are a Miroslav Tichý photograph of a young woman reading on a park bench (Untitled, 1960-80); a grid of lithographs entitled Ritratto dell’artista come modella (Portrait of the Artist as a Model) (1980) by Giulio Paolini; Mirror (1992) by Arte Povera artist Michelangelo Pistoletto; Rineke Dijkstra’s performatively ambiguous Self-Portrait-Marnixbad-Amsterdam-Netherlands-June-19-1991 (1991); Thomas Ruff ’s foreboding Nacht/Night 5 (1992); a pair of pictures by Wols; and two rather ludic 1972 lithographs (same drawing, different colouration) by Situationist Jacqueline de Jong.
Virtual exhibition: capturephotofest.com/exhibitions/wait-until-dark
howard495.com