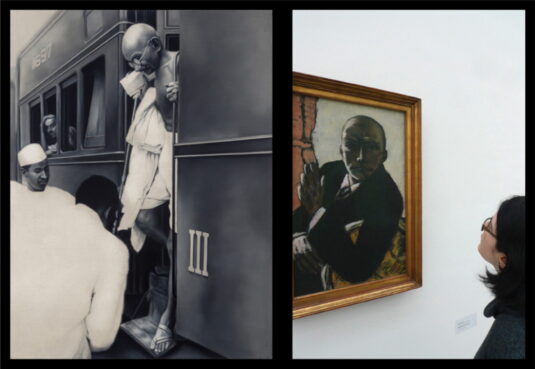 ART GALLERY OF ALBERTA, Edmonton AB - To Jan 6, 2019
By Michael Turner
Co-curated by AGA executive director and chief curator Catherine Crowston and the National Gallery of Canada’s associate curator of contemporary art Jonathan Shaughnessy, this exhibition presents work in film, video and the plastic arts by 20 contemporary artists of Indian ancestry from both India and Canada. Emphasis here is not only on the range of media and aesthetic styles therein; the show also focuses on the complexities of overlapping histories and borders, on conceptions of the land and its material and symbolic uses, as well as colonialism, migration, immigration and diaspora.
If a single work comes close to encompassing the thematic scope of Vision Exchange, it might be Punjab-born Toronto artist Sarindar Dhaliwal’s the cartographer’s mistake: the Radcli e Line (2012), a 27- by-27-inch chromira print that features a series of digitally rendered photographs of marigolds montaged to represent the borders of Pakistan, India and Bangladesh. Although residents of the Subcontinent agree on the marigold’s medicinal properties, the region’s borders, like that hastily drawn between India and Pakistan by British lawyer Cyril Radcli e in 1947, remain contentious. Imposed from without, the Radcli e Line resulted in mass displacement and the destruction of numerous communities.
In addition to Dhaliwal, participating artists include international high fl yers like London-born Bharti Kher, whose fi rst North American survey was mounted at the Vancouver Art Gallery in 2016, and exhibition circuit favourites Raqs Media Collective. Among the artists representing Canada is Winnipeg / New York / Delhi-based Divya Mehra, whose thoughtful yet often humorous recontextualizations of music, literature and current events had her shortlisted for Canada’s prestigious Sobey Art Award in 2017.
youraga.ca