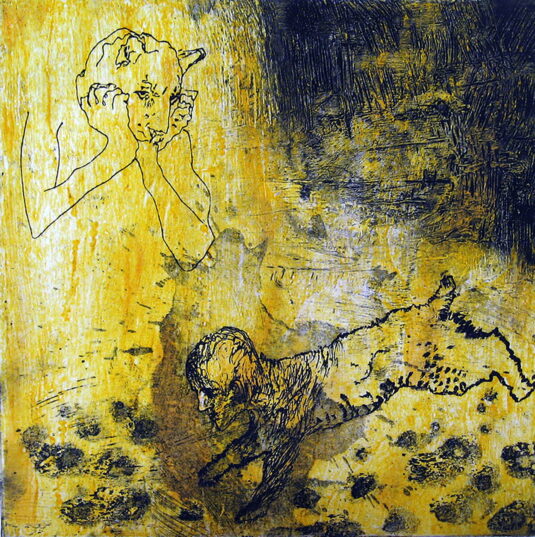 ALBERTA PRINTMAKERS GALLERY, Calgary AB - To Nov 30, 2018
By Michael Turner
The publication of Sigmund Freud’s Interpretation of Dreams (1900) was a landmark 20th-century event. On the one hand, the book recognized the dream as a “royal road to the unconscious,” while on the other, it turned the dream from a work of the imagination into something that could be folded, spindled and mutilated through clinical visits. For multidisciplinary artist John Graham, “Dreams know the truth of the world,” and as such are more generously expressed through the arts than through reductive scientifi c methodologies.
In his current “ensemble of prints,” Graham writes that he has “created imagined visualizations from possible dream experiences as distilled, poetic laboratories. Each embodies its own enigmatic inner logic. The experience of this work is not intended to appease the conscious mind but to challenge it. Potentially each image may expand consciousness, widen psychic receptivity and speak to the authentic self.” This in contrast to Freud, who believed that the dream “prefers to draw opposites together into a unity or to represent them as one.”
Graham’s emphasis on “spontaneous juxtapositions that create open, metaphorical relationships” can be found in etchings such as Now Watched (2016). Here, over a yellow fi eld patched with black paw prints and a quarter-sectioned square portal, a cat with a human head frolics before a cat-headed human fi gure. At fi rst glance, the human fi gure appears to be looking on thoughtfully, its hands under its chin. But on closer inspection, the hands are not so much supporting their head as trying to remove it, as if it were a mask.
albertaprintmakers.com