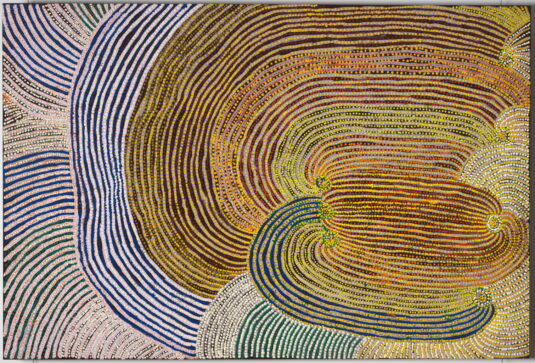 AUDAIN ART MUSEUM, Whistler BC - To Jan 28, 2019
By Michael Turner
With the 21st century nearing the end of its teenage years, one could argue that the greatest shift in Canadian contemporary art is not the primacy of one medium or style over another, but the presence and appreciation of Indigenous artists working across numerous media, in a range of idioms and styles. The same could be said of Australian contemporary art, as evidenced by the holdings and scholarship of the Kaplan & Levi Collection, which features works by Indigenous Australians and Torres Strait Islanders.
Together, the work of these two Indigenous populations is representative of the world’s oldest continuous artistic tradition. Yet with all traditions, variation is inevitable – if not a measure of a dynamic culture. A hallmark of the Kaplan & Levi Collection is its focus on how “outside” influences like Western modern art are integrated within an ancient and enduring visual language (often comprised of dots and topographies) without determining that language or making it illegible to older generations.
Key artists represented in the exhibition include Emily Kame Kngwarreye (1910-1996) and Rover Thomas (c. 1926-1998), both of whom are associated with the adaptation of traditional ground drawing and body painting motifs to canvas. Kngwarreye, who came to painting from ceremonial design and batik, is best known for her yam track landscapes. Thomas was also late to painting. After many years working as a stockman, he was inspired by the spirit of his deceased aunt to create the Krill Krill ceremony, a song and dance cycle associated with painted boards, the fi rst of which were made by his classifi catory uncle Paddy Jaminji (1912-1996).
audainartmuseum.com