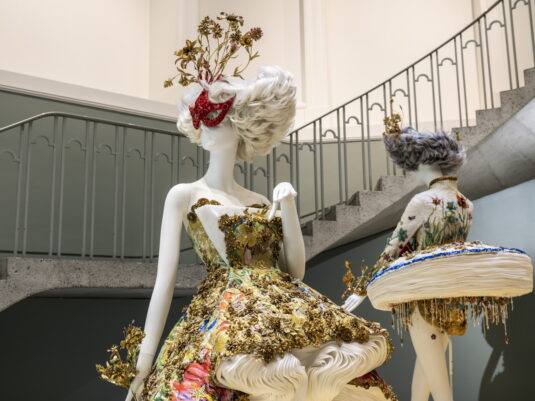 VANCOUVER ART GALLERY, Vancouver BC - To Jan 20, 2019
By Michael Turner
Billed as the VAG’s “first-ever fashion exhibition,” Guo Pei: Couture Beyond is a survey of more than 40 complete runway looks produced by the internationally renowned Beijing-born designer Guo Pei between 2006 and 2017. Although the clothes take centre stage in this radiant exhibition, the context in which Guo grew up is also present.
The daughter of a People’s Liberation Army battalion officer and a kindergarten teacher, Guo began sewing winter clothes with her mother at the age of two. In the early 1970s she became interested in dressmaking. “I used to alter the loose dresses that my mother handed down to me so they were more stylish,” she told Forbes in an interview earlier this year. “When I wore them to school, my teacher angrily accused me of being a capitalist.”
By the time Guo graduated from Beijing Second Light Industrial School in 1986 with a degree in fashion design, the People’s Republic of China, under Chairman Deng Xiaoping, had instigated a number of reforms. Gone were the Mao suits and sensible shoes, and in came companies like Tianma, China’s first privately owned clothing manufacturer, where Guo worked until setting out with her own brand in 1997.
Among the highlights of Couture Beyond are the garments in Guo’s gold, white, blue and red Garden of the Soul (2015) “music box” collection. Equal parts traditional Chinese design, Court of Louis XVI and London’s Swinging Sixties, Guo’s mini- to midi-length, sometimes bubble-sleeved dresses are composed of embroidered silk, sequins, Swarovski crystal and beads, brass feathers and florets. As for the shoes – elevators sold separately!
vanartgallery.bc.ca