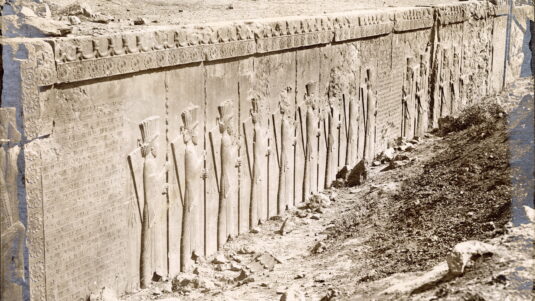 The Polygon Gallery, North Vancouver, BC

THE POLYGON GALLERY, North Vancouver BC - Nov 2, 2018 - Jan 13, 2019
By Michael Turner
Every country has its own history of photography. For Iran, that history began in 1842, three years after the invention of the daguerreotype. In the 1850s photography was a sanctioned practice in Iran, a formalized department at the country’s first Western-style university and a practice in service of a shah who commissioned photographic documentation of ongoing excavations at Takht-e Jamshid, also known as the ancient city of Persepolis. For the shah, these pictures were important to the fomentation and maintenance of a national identity – in particular, the relationship between a modernizing nation and its past.
Drawn from major private collections and guest curated by Vancouver gallerist Pantea Haghighi, Looking at Persepolis features a number of rarely seen prints and photo albums. Photographers include Luigi Pesce (1818-1891), an Italian colonel stationed in Iran during the reign of Naser al-Din Shah Qajar, who commissioned Pesce and his expedition. Another is French archaeologist Marcel-Auguste Dieulafoy, whose excavation of the ancient city of Susa (now Shush) resulted in his fi ve-volume folio L’Art antique de la Perse (1884-89).
Closer to our time are contributions from Antoin Sevruguin (c. 1840-1933). Born in Tehran’s Russian embassy of Armenian-Georgian parents, Sevruguin gave up painting after the death of his father to better support his family. After opening a photography studio with his brothers, Sevruguin, who spoke a number of languages, became a favourite among the country’s increasingly cosmopolitan elite. In addition to private portraits, he is known for pictures of the royal court, harems and mosques. Like those of Pesce and Dieulafoy, his Persepolis pictures were widely published and circulated in magazines and travelogues.
Opening reception Nov 1, 8pm
thepolygon.ca