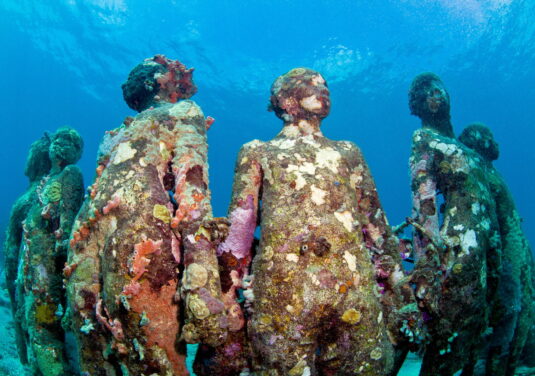 WHATCOM MUSEUM, Bellingham WA - To Jan 6, 2019
by Allyn Cantor
This thought-provoking exhibition features an international roster of artists who engage with natural science and environmental issues, providing a critical role in building awareness and understanding of matters related to the health of species throughout the planet.
The impressive range of works assembled for this show spans three centuries and includes such things as rare books, early botanical illustrations and engravings of mammoth skeletons from the 1800s. Twentieth-century icon Andy Warhol portrayed endangered species from around the world in a 1983 series of 100 pieces; several of these gorgeous, colorful silkscreens are part of this exhibit, and all but two of the creatures he rendered remain listed in the Endangered Species Act. Contemporary works including poignant examples of video, painting, sculpture and photography represent current vulnerabilities and threats to biodiversity.
Several key themes are interwoven throughout the show. Stunning examples of landscape and microscopic imagery show the complexity of living creatures and the importance of their natural surroundings. Natural extinction as told through the discovery of fossils and reimaginings of prehistoric life is refl ected in both historical and contemporary pieces, as well as themes of early human-induced extinctions where artists created meticulous portrayals from scientific documentation of animals such as the dodo.
The global decline of biodiversity is perhaps the most pressing theme here, and the artworks bring attention to precarious plants and animals at risk due to things like population growth, pollution and habitat loss. A hopeful narrative is presented in the last theme, where cross-disciplinary projects are used as tools for revitalizing places like tropical rainforests and coral reefs.
whatcommuseum.org