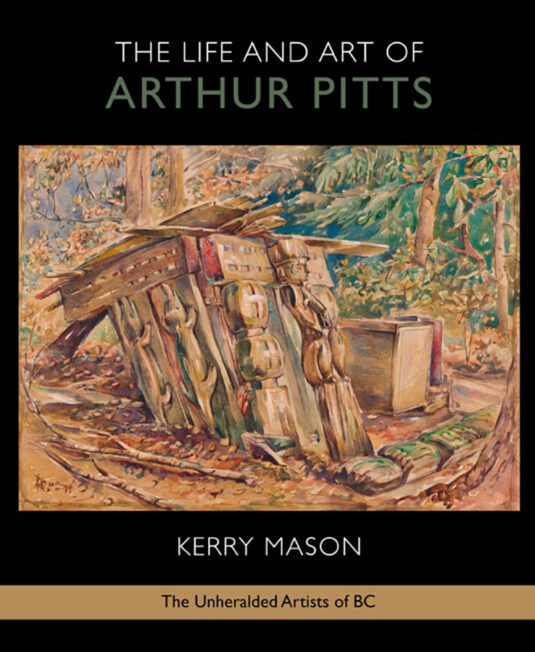 by Kerry Mason
Almost 40 years ago, I saw an Arthur Pitts watercolour for the first time; it was tucked away in a drawer in the BC Archives. The “Who is this artist?” question propelled me on a long and rewarding journey. Here was an Edwardian Englishman (1889-1972) who had created an important record of First Nations Peoples and their cultures with carefully dated portraits and journals documenting Coast Salish, Nuu-Chah-Nulth, Kwakwaka’wakw, Tlingit, Haida and Ktunaxa communities in BC and Alaska.
Very little information existed about him, but over four years, I acquired a deeper understanding of his work by reading his 47 diaries, loaned by his widow to encourage my writing of his story: The son of a tailor’s assistant, he was born in the slums of Victorian London and, with determination and passion, followed his dream of becoming an artist. Further research criss-crossed the Atlantic, a journey Pitts made many times.
Leaving school at 14 to help support his family, Pitts apprenticed with a London commercial art firm. He soon began studying photography, and in 1909 numerous references to painting start appearing in his journal. His first great adventure was moving to South Africa in 1912. Working for a rural railway, he commenced a quest to learn about the Zulu. He photographed them and their villages, studied customs and dialects, and enjoyed friendships.
After coming to Canada in 1914, Pitts worked a long, hot summer on a Prairie farm until World War I began and he enlisted with the 27th Battalion in Vancouver. While fighting in Europe in 1915, he was severely wounded and brought back to BC. He lived on the Saanich Peninsula, near Victoria, home to the Wsánećć people, where he met the love of his life, Peggy McKenzie. Once recovered, he started formal art training, first by correspondence and then at the Westminster School of Art in London in 1920. His return to BC brought him to the Vancouver School of Decorative and Applied Arts and into the orbit of Frederick Varley, Charles Scott and Jock Macdonald.
Pitts had a successful decade in commercial art, during which he travelled to coastal First Nations communities to sketch and paint. With invitations and permission from Coast Salish families, he experienced and recorded their cultures and ceremonies. After his 1930s sketching trips, which included Alaska and the Kootenays, Pitts and McKenzie spent 10 years in London. After World War II, back home in Saanichton, he was pleased to finally sell his First Nations water- colours to the Royal BC Museum and the Glenbow Museum. In his later years, he continued to paint, exhibit, travel and teach art.
This article is based on the book of the same name, 10th in The Unheralded Artists of BC series (Mother Tongue Publishing), which illustrates and explores the lives and art of important but previously undocumented BC artists from the 1900s through the 1960s.
The Life and Art of Arthur Pitts by Kerry Mason, with a foreword by Daniel Francis, is due out in November 2017 from mothertonguepublishing.com.