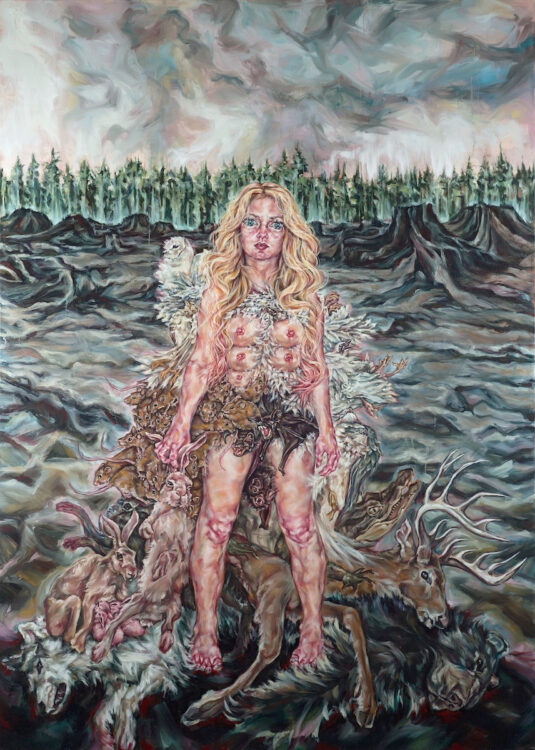 Two Rivers Gallery, Prince George BC – through Oct 8, 2017
By Michael Turner
For many, mention of “the woods” brings to mind a forest setting populated by plants and animals, a place of peace or treachery, depending on who is telling the story. If the teller is Forest Idyll (1924) sculptor Albin Polasek, the woods are a gentle place where man and nature coexist; if the teller is Tammy Salzl, coexistence is a more complicated affair, and not without its conflicts.
Salzl’s current series of oil and watercolour paintings provides scenes that evoke those found in classical mythology through to more recent works like The Wizard of Oz and Disney films. In The Chorus (2011), Artemis, the Greek goddess of the hunt and the forest, sits atop a mound of dead animals in the middle of a clear-cut. In The Sacrifice (2008), a child in red slippers is led down a path by an older axe-toting figure.
With its narrative and decorative elements, it is hard not to think of The Sacrifice as a conflation of the Old Testament story of Abraham and Isaac and The Wizard of Oz. Making this work especially poignant is the model Salzl used for the child’s face and body – her daughter, who recently underwent gender-confirming surgery.
tworiversgallery.ca